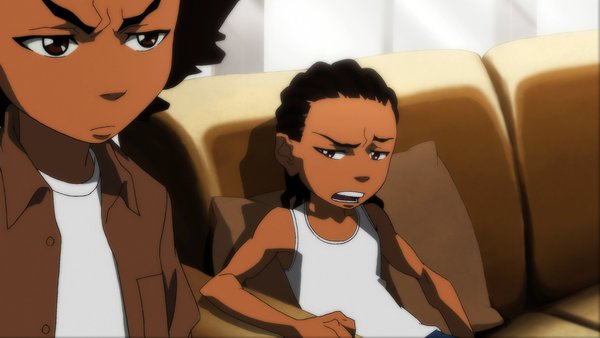 “The Boondocks,” the edgy animated series based on Aaron McGruder’s comic strip about 10-year-old black militant Huey Freeman and his gangsta-wanna-be younger brother Riley living in the suburbs with their grandfather, is returning April 21 for a fourth and final season on Adult Swim.

However, there’s a catch. McGruder, who created the series and was its key creative force, is not along for the ride.
The new season follows Huey, Riley and Granddad who meet several new and familiar characters in outrageous situations. Some of the characters include a long lost Kardashian sister that Granddad is dating; Tom DuBois as R&B bad boy “Pretty Boy Flizzy’s” lawyer, and Graddad’s love relationship with his iPhone’s Siri.

Returning to the new season as the voices of Huey and Riley is Regina King, and John Witherspoon is  returning as the voice of Robert “Granddad” Freeman.