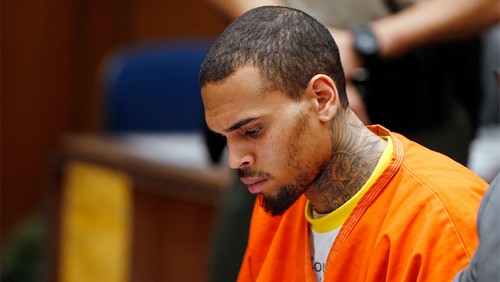 R&B singer Chris Brown is not going to receive the superstar treatment he is used to as reports claim he will likely experience some tough conditions while behind bars on a probation violation.

In the court proceedings, where Brown attended wearing his orange jumpsuit, the judge spoke about the violations that had the Tappahannock, Virginia revoked from the rehabilitation center.

The judge spoke about Brown’s “inability to stay out of trouble,” and went on to discuss a comment the singer made during a group session where he said: “I am good at using guns and knives.”

Apparently, Brown was also ordered to stay two feet away from all females and was caught touching the arms and elbows of several women at the center.  Additionally he refused to take a random drug test, though he eventually conceded and took the test.

TMZ is reporting that the ‘No Air’ singer will only be allowed to shower every two days while in jail.

The entertainer does not have a cellmate as he is in solitary confinement while in jail for 23 hours a day.

He will be allowed to work outside of his cell and can read books while locked up.