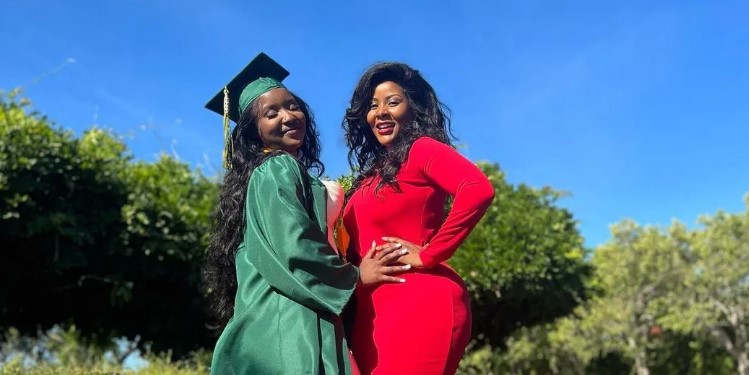 Ugandan-US California based recording, performing artiste and philanthropist, Desire Luzinda is all smiles with the latest academic achievement of her daughter, Mitchelle Kaddu.

Mitchelle Kaddu just completed her High School studies with an impressive score of CGPA 4.0, paving way to her dream career in Medicine.

Kaddu and mother Luzinda relocated to the USA to live in the state of California a few years ago where the latter became the founder of Desire Luzinda Foundation International (DLFI) established on June 5, 2021.

Mitchelle Kaddu was then enrolled in school where she has developed her education until she capped it with a graduation at the start of the week.

Proud mother revealed her joy to the world with photos of Michelle dressed in her gown as she celebrated the good news of her daughter’s success.

“Every step is worth celebrating. Thank you Lord for bringing us this far. Michelle you made mama Proud,” Luzinda posted on her instagram.

She thanked everyone who congratulated her daughter upon the new milestone and revealed that she is now set to join Medical School.

Desire Luzinda is a recognized artiste in the country with awards, certifications and recognitions spanning her music and philanthropy including;