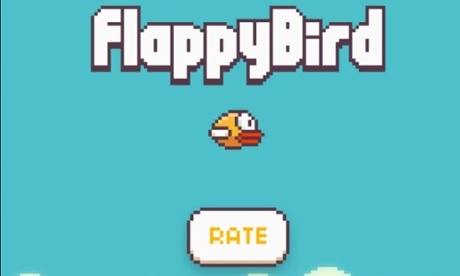 Flappy Bird is flapping its wings no more.

The popular game for mobile devices was removed from online stores on Sunday by its Vietnamese creator, who said its fame “ruins my simple life”.

Dong Nguyen, who created the game in just two to three days, was making as much as $50,000 a day from the game’s advertising revenue.

In several Twitter posts, he said the game’s removal was not due to legal issues and that he may make a sequel.

Mr Dong, who describes himself as a “passionate indie game maker”, also said on the micro-blogging site that he will not sell Flappy Bird but that he will still make games. 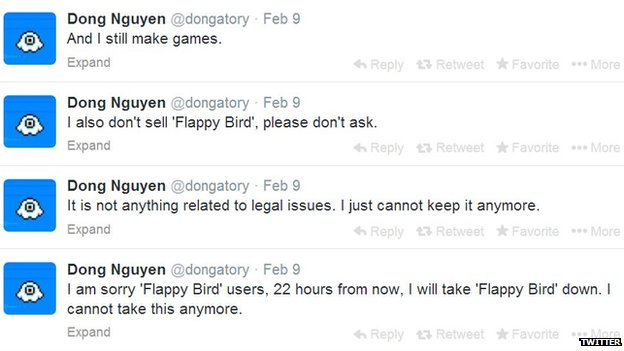 Flappy Bird has been downloaded more than 50 million times, making it this year’s most popular mobile game so far.

Launched in May 2013, the game was free to download and required players to tap the screen to keep the bird in flight.

Despite its simple graphics, Flappy Bird was a notoriously difficult game since many users could only keep the bird in the air for a few seconds before it hits an obstacle and falls.

The game went viral after being promoted almost entirely by social media users and was reviewed on a YouTube channel by more than 22 million subscribers.

The official version was only available for Apple and Android devices. It quickly became the number one free game in the Apple App Store and Google Play Store charts. 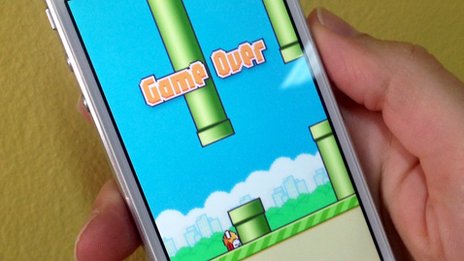 Flappy Bird is no longer available for downloads

After Mr Dong took the game down, many fans turned to social media to petition for its return.

On Twitter, there were widely-used hashtags of #RIPFlappyBird and #SaveFlappyBird, with several “Save Flappy Bird” accounts being spawned as well.

The game is no longer available through online stores, but it still works on phones that had previously downloaded it.

As a result, some online users have offered to sell their smartphones still containing the Flappy Birds app for large sums of money.

However, some fans expressed their relief that the game was gone.

One user describes Flappy Birds as “an addictive game that everyone hates to love” while another said, “I think it’s for the best, and for the best of all the cracked phones out there.”

At least one user has tweeted a photo of a cracked iPhone screen – apparently as a result of frantic tapping whilst playing the game.