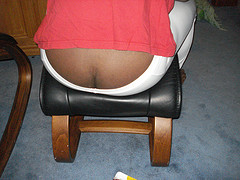 What is worse? A campus girl accidentally showing her ass crack (the start point of where the buttocks divide, for those who do not know) or a full grown campus gentleman showing off his inexpensive not so clean underwear.

Is it a mistake? … Is it intentional? …  Do they want it to be seen? These are just some of the questions that I found out run through people’s heads whenever things are seen. This time it is not only about the ladies, the men also fall culprit of this display of un-pleasantries.

First off, due to the continuous change in fashion and the need to be trendy, there is huge pathway for wardrobe malfunction to occur. There is nothing wrong with nice fitting jeans in this day and age, but what to wear with them is the big question. A campus girl will want to feel hot, sexy, trendy which is acceptable, but when they bend to pick up a pen or book that they have dropped while entering or getting out of class depending on the outfit they are wearing… yikes!!! That is a whole new different story. I will not even go into the scene of one bending trying to get out of a taxi; it is a lot to take in. (The reveal of the butt crack; awesome novel title. )

Majority of those watching these displays may say it’s a form of seeking attention and yes, it works. The type of attention they are receiving is another question. Others say it could be an honest mistake claiming that the person did not know. And then there those who just do not care about what is happening or what they are showing. Now for the last category all I can say is it’s a shame, it really is. A little mercy and consideration wouldn’t hurt unless your damn or something.

Now to the campus gentlemen still balancing showing not so sexy underwear, clearly that is a sign of missing a stage in development. The origin of balancing has been said to come from guys in prisons in the western world not having belts to hold up their pants; thus making it a trend. Not quite sure how true that is but it does make sense. The reason why underwear has the word under in it is because it is meant to be under your clothes not to be seen. My question to you gentlemen falling in this group, what is wrong with pulling up your pants? 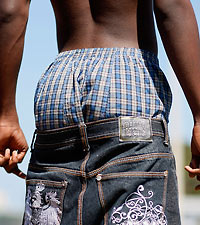 I did not get the memo that the prices of belts and proper fitting pants have hiked to a level that an average person cannot attain them. Am yet to receive it and probably understand.

As I began this article I asked what is worse. As I think about it more I can’t decide because both are strange in their own way. I figured the best way to get an answer is to ask yourself what can I stand looking at and being next to for a full five minutes; up close and personal. Not a nice thought!!