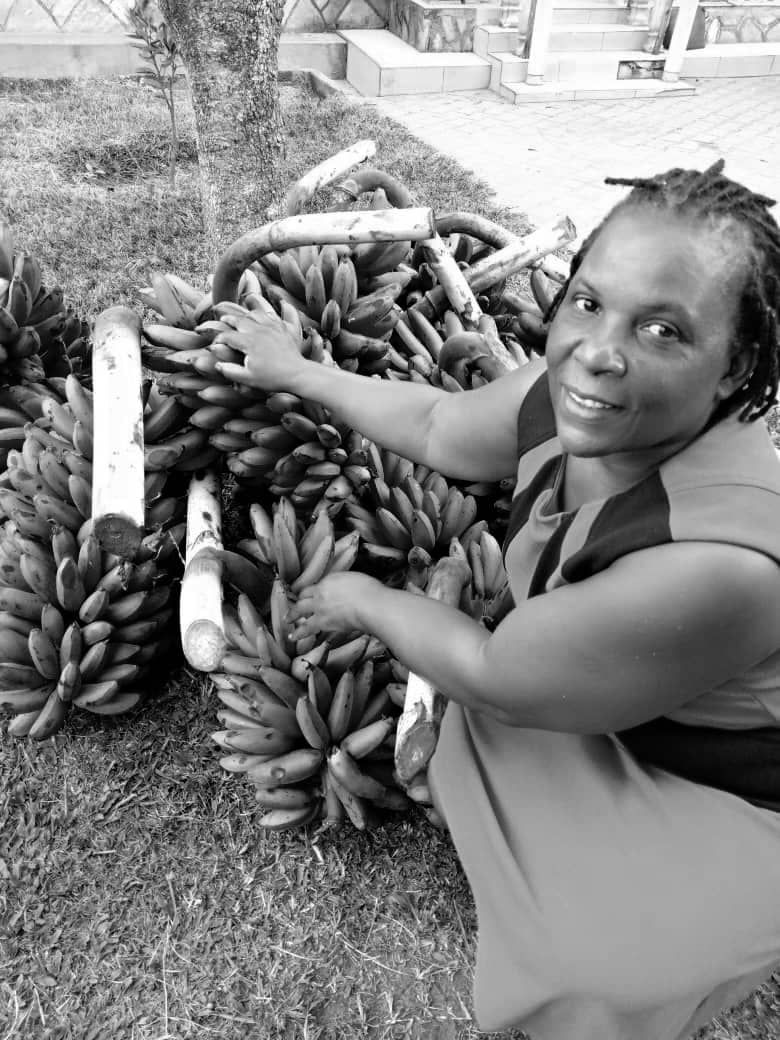 Dr. Florence Birungi Kyazze, 53, is a Makerere University Lecturer who instantly channeled her hustle from lecturing to selling matooke, harvested from her farm. Dr. Birungi is a senior lecturer at Makerere University’s College of Agriculture and Environmental Sciences who plans to concentrate on her farm when she retires.

While talking to Campus Bee on Tuesday morning, Dr. Birungi confessed that the measures implemented to fight COVID-19 affected her market so much something that forced her to come up with new ways of selling her matooke, fruits and other produce from her farm.

Dr. Birungi, however, did not know that the neighboring community of Kanyanya, Komamboga, Kawempe Division would become her main market. She narrates that she started by giving out free food to vulnerable poor people in her neighborhood and later those with money started to approach her for matooke, onions, tomatoes and other produce harvested  from her farm.

“My farm was already around but what I was not doing was the marketing of the banana. So when this COVID-19 came, the market became a challenge. I started by giving out free food, I would go to my garden, harvest matooke and give it to vulnerable households in the community that you can look and really know that these people are vulnerable,” Dr. Birungi narrates to this campus news website.

“I had decided that all the proceeds I’m getting from the banana, we are going to share with the community in terms of food because I know food is a challenge. But then along the way some people came and they really wanted to buy,” she added.

While talking about how much she earns from the matooke, Birungi revealed that she sells to whoever comes regardless the amount of money one has. She sells matooke from as low as 500 shillings to the community that she strongly believes will become her major market.

“If someone has 500 shillings we count and give them. If somebody has 1000 shillings we cut kiwago (bunch) and give them. I know it is not making profits but I know that I’m actually helping the community where I live. So now my home has become a market, when people see me coming they run after my vehicle to ask if I have things for selling.” Birungi added.

She also noted that her community has now helped her market the produce without having to move door to door telling those who didn’t know. Birungi has been using vans to sell her matooke while her passion fruits’ market was the Makerere community. Thanks to this COVID-19 lockdown, Birungi doesn’t think she will have any surplus for outside communities.

Birungi also confessed that this period has helped her to understand her community better because she never moved beyond her neighbors. Apparently some people had never seen her in person because she would only move in her car while going and returning from Makerere.

“I know the market because I’m doing agriculture as a business. So I keep asking how much other famers are selling their matooke,” Dr. Birungi explained how she keeps up with the prices to avoid over charging her customers.

On whether she plans to continue with the matooke business after the lockdown, the Makerere senior professor assured us that she will do business over the weekend, besides, she has employees at home.

“Lectures are going to resume soon but the marketing is on weekends. By the way, you are talking to a 53-year-old woman, so I’m almost retiring. In fact, I was like let me try out and see how it will be like when I retire,” Dr. Birungi revealed.

Dr. Birungi is so passionate about her job and there’s nothing she loves more than her students. The Makerere University lecturer also told Campus Bee that she only has time for her family, garden and students and she has no time for WhatsApp.

In a bid to stop the spread of Coronavirus, Dr. Birungi makes sure all her customers sanitize before getting in contact with anything. She sometimes delivers the matooke at the gate, where she makes sure they wash their hands first.

Dr. Birungi concluded that she has seriously spread the COVID-19 awareness in her community. In her advice to young people, Dr. Birungi urged them to always consider humility before anything else. She believes that treating people well has everything to do with success and a happy life.