From No Phone to an iPhone X: “Twende Tupate” Hypeman Gets First Phone From Sage Buyers 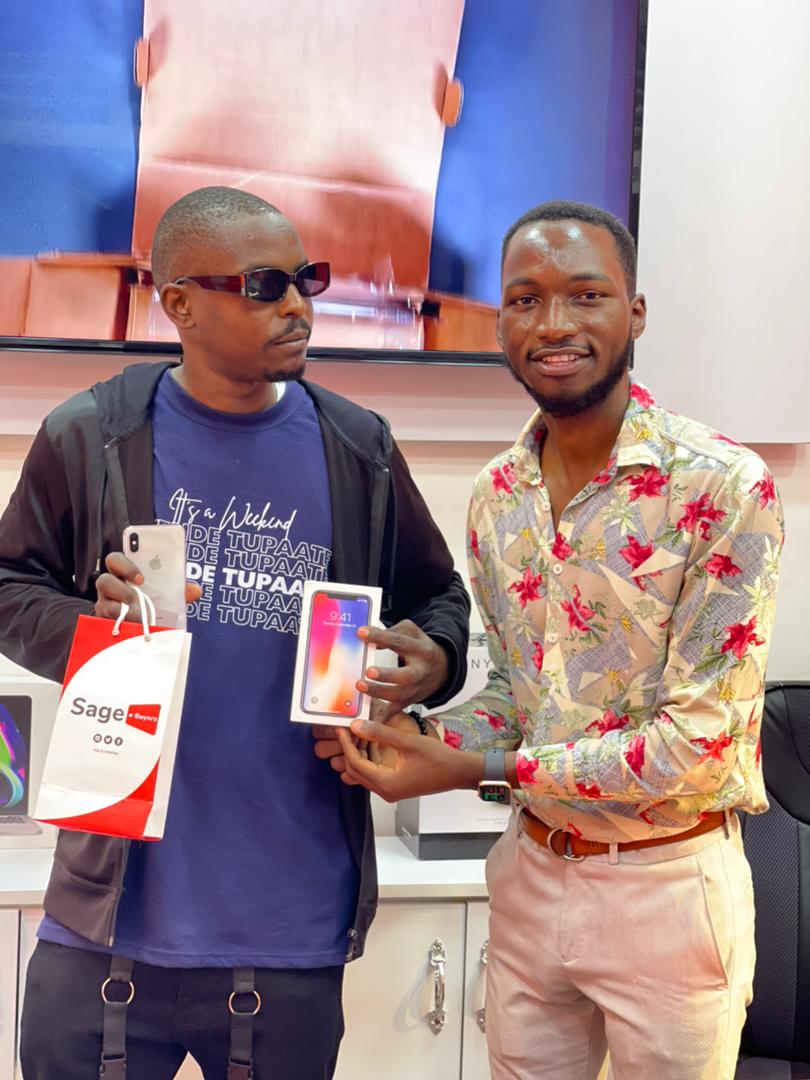 They say if it is your time to win, nothing will stop you. Or that nothing can stop an idea whose time has come! The second is really a long shot, I agree. Doesn’t apply in this case but I know you get the drift.

By now, every Ugandan on social media knows who Mc Africa is. His energy and good vibe broke through during the 42 days of lockdown and he effortlessly gave people reason to smile amidst work stress and other stresses of life that the pandemic has dragged among us. Every Friday, his video’s dancing to Pia Pounds’ “Twende Tupate” literally showed up in at least 5 of your contacts’ WhatsApp statuses.

“Its a Friiidddddaaaaayyyyyy!” He always screamed in the videos. In one the initial videos, where he seemed stressed and eating unidentifiable leaves, he admitted that it was Friday morning and he didn’t have money. But he was hopeful that by the end of the day, he would have got some ka money to enjoy the good things life has to offer. And I agree with him, problems can never be exhausted. “Problem no dey finish, eat life.”

Well, after picking majority Ugandans’ attention, he finally met Pia Pounds, the artiste whose song he had been hyping all through. And since that day, it has been a ride for him. He even featured on the NTV Dance Party last night.

The man from Mbale, who didn’t have a phone as a possession, is now a proud owner of an iPhone X from Sage Buyers, an iPhone and Apple accessories dealership in Kampala. Using Pia Pounds as a contact person, the team at Sage Buyers reached out and donated an iPhone X to MC Africa, giving him a natural “from grass to grace” transition. Such a phone must have been in his wildest of imagination, if there was any imagination of an iPhone for him in the first place.

Speaking to Campus Bee, Stanley Ssempijja the Sage Buyers CEO said MC Africa is a very energetic fellow that needs to be celebrated. He said that his ability to get Ugandans battling all sorts of troubles in the lockdown, to at least afford a smile, is a contribution that is priceless and that they’re proud to associate with him as a brand.

“MC Africa embodies the energy and vibrancy that we believe in. His talent and platform is an inspiration to many young people and an iPhone shall therefore amplify that value for the common good of Ugandans.” Ssempijja said.

In an interview with Campus Bee earlier this year, Mr. Ssempijja told us that Sage Buyers believes mobile technologies can change lives. This was in light of our concern at how many giveaways they have done as dealership having had monthly iPhone giveaways across social media for a long time.

“In moving towards our vision- an iPhone for every Ugandan, we are committed to making it possible for our followers and fans on social media through giveaways. To be our next winner, you can follow us on Twitter, IG and LinkedIn and turn on your notifications.” He said.

Located at Kooki Towers in Shop 544, Sage Buyers sells genuine brand new and used iPhones and MacBooks with an ambitious drive to have every Ugandan using an iPhone. They are on Social Media as @sagebuyer on Twitter and @sage_buyers on Instagram. Reach them also on mobile at 0705287061.

At Campus Bee, we are happy for MC Africa and hope this is the beginning of a life turn around for him.