“I think this life is not for me, I am off to a better place” Makerere Student Posted Before Taking Own Life 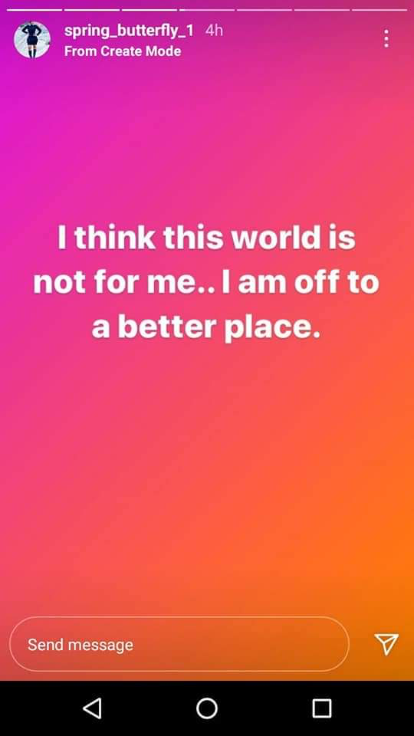 Another Makerere University student has taken her own life after sharing a series of Instagram and Twitter posts asking her followers to help her choose life or death. This is the second Makerere student to commit suicide in the space of 24 hours. On Sunday night, Natasha Byengyeru is reported to have taken her own life. Now, last night, another student only identified as Tasha also took to her social media pages to announce “she needs help.”

Under her Instagram handle “spring_butterfly_1” she sent a series of stories pointing to her committing suicide. “People are heartless and inhuman” Tasha, as popularly known by her friends posted on her Instagram story.

“I think this world is not for me, I am off to a better place,” she added. ‘what if this life as we know it was completely useless and meaningless….’

‘what if I wanted to die today’ Tasha posted before going a head to post a photo of pills.

Hours later, she was found dead in her hostel room. Tasha was in her fourth year at the School of Law and was set to graduate this year.

According to her social media friends, Natasha has been for long fighting depression however they do not reveal exactly what got her depressed.