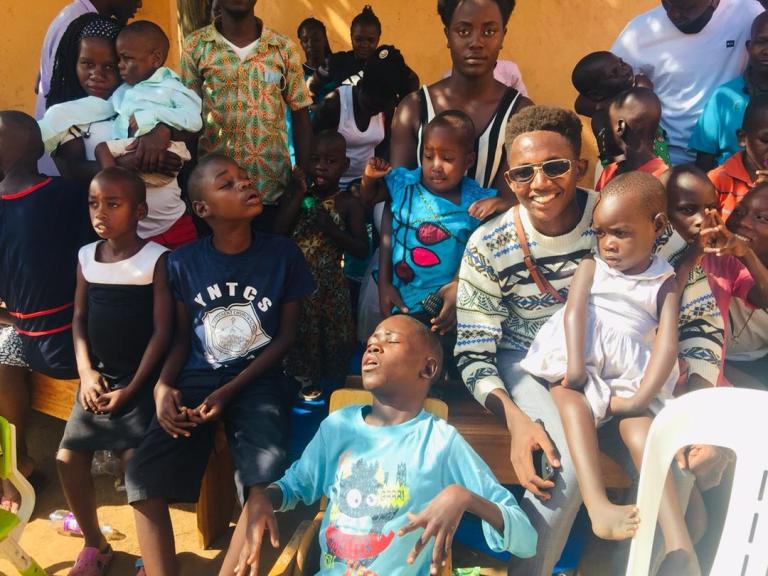 Joshua Rukundo (in shades) with the children benefiting from their charity

Compassion, generosity and humanity are among the many words defining philanthropy. Innocent Kanobana, who has a particular passion for helping the less privileged, embodies such a definition. In 2015, he formed an underprivileged child charity organization, the Rukicare Foundation.

Two years down the road, when Kanobana wanted someone to run the charity as its chief executive officer, Kanobana did not look further than his teenage grandchild, Joshua Rukundo, a Uganda Christian University (UCU) student. Rukundo was 18 years.

Fast forward to 2021.  Twenty-three-year-old Rukundo is a UCU final-year student of the Bachelor of Arts in Mass Communication. It is not only Rukundo who has changed, but his organization, too, has since grown. Rukicare Foundation that started with a handful of boys and girls now caters to over 50 children. Rukundo says the bedrock of the foundation has been his family’s deep-rooted culture of giving to those less fortunate.

Noah’s Ark had earlier sent a call to the public to donate scholastic materials to their child-beneficiaries, who had to return to school. The children had been out of school since the Covid-19-related nationwide lockdown on education institutions in March 2020. A year later, schools were allowed to reopen but then closed again with a 42-day lockdown starting June 7.

Rukicare Foundation donated not only scholastic materials such books, pencils and pens that they had asked for, but also offered food, clothes and packs of medicines.

“Since the government has opened schools, we decided to come in and provide the children with the necessary scholastic materials, to enable them to continue with their studies unhindered,” Rukundo explained before the second lockdown.

While most charities focus directly on the beneficiaries in their custody, the mandate of Rukicare Foundation is a little different. Where possible, they also take care of the needs of the beneficiaries under the care of other organizations.

“Sometimes, these children become too heavy a responsibility for their own parents, who end up dumping them, because they are unable to provide even the most basic of needs,” Rukundo, who believes abject poverty and negligence by many parents in Uganda is one of the reasons behind children ending up under the care of such organizations, said.

Among the charities Rukundo’s organization supports are Kitgum Home of Children in northern Uganda, Mercy Hands Uganda in Mpigi district, central Uganda and Kireka home for people with a hearing impairment, located in Kireka, near Kampala.

John Safari, the Chief Executive Officer of the Noah’s Ark Special Needs Children Facility, was delighted with the support received from Rukundo’s foundation. Hoping for more such donations, Safari said they intend to establish a medical center for the facility.

“We are in the last stages of acquiring land to build a hospital for the special needs children,” Safari said.

Despite being able to look out for other charities, it does not mean Rukicare Foundation is insulated from obstacles. Rukundo said even with being registered, and having a valid operation permit and a requisite certificate of incorporation from the Uganda National Board of NGOs, the NGO pays tax on humanitarian imports, such as medicines, which he says should not be the case for a registered company like theirs.

“In January 2021, we imported humanitarian medicines from India, but we feel we were unfairly taxed,” Rukundo said.

Such challenges can intimidate an organization without a major funder, but mainly dependent on 20% of the salaries of each of the members of the Rukundo family. And because of financial challenges, Rukundo has occasionally reached out to fellow students at UCU and other universities, to mobilize resources so that his organization is able to realize the philanthropy dream of the Rukundo family.

As he looks to his UCU graduation this year, Rukundo is grateful for his university education.

“UCU enabled me get more connections to people that are already running charity organizations. Then, it also deepened our connections to certain partners,” said Rukundo about his UCU experience. “My Bachelor’s has bettered my communication to potential partners and sponsors. It has also equipped me with skills to start and run the organization’s social media pages.”