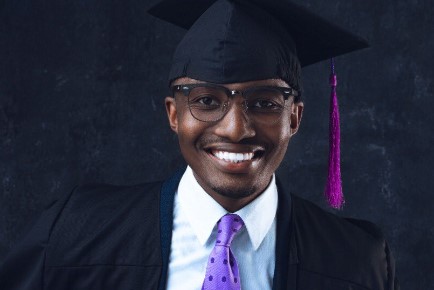 Celebrated NTV journalist, Raymond Mujuni is all smiles today after adding an accolade to his studding cabinet.

“We congratulate @qataharraymond, Bachelor of Governance and International Relations from the Centre of Excellence in the Heart of Africa,” UCU tweeted.

Mujuni Raymond is an investigative journalist in East Africa currently working with Nation Media Group as the head of the Current Affairs Programming and show Host for the Fourth Estate program.

He is the Deputy Director at the African Institute For Investigative Journalism, a non-profit home of Investigative reporting in Uganda

Raymond is a three time winner of the National Journalism Award for explanatory reporting and Investigative Reporting for his stories that exposed a high end government to government deal for the exchange of refugees for guns between Uganda and Israel.

He also received the Explanatory reporting award in 2020 for his story chronicling the fate of MV Templar. His impactful investigation on Makerere’s sexual harassment caused a review of the University policy and a debate on a national sexual offences bill.