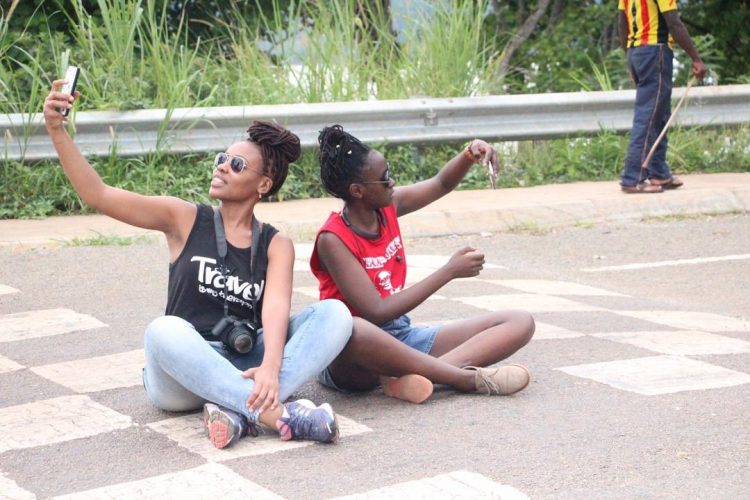 The Airtel 4G Tour experience that kicked off on Wednesday, February 27th is a journey that inspired some of the most passionate travel bloggers to discover the hidden treasures within the Pearl of Africa as they experienced Airtel‘s 4G.

The memorable trip featured travel bloggers like Fay Kakai Khukyenda, Edna Ninsiima alongside other officials from the giant telecom company.

With a little doubt whether Airtel 4G is real, the Western Uganda trip had these bloggers hit the road as they penetrated through some of the region’s National Parks all the way to the border while enjoying an improved wireless internet connection.

A trip that featured nothing more but taking selfies, checking out the best food stores as well as staring at the ever amazing nature couldn’t get more enjoyable without internet. Major activities of the trip kicked off at Kagorogoro tea plantation where they made their first stop as the anxiety to discover more couldn’t let them stay much longer.

They later made a stop at Kibale National Park, also known as the home of Chimpanzees, which is one of Uganda’s most desired destinations by several tourists and . The park is 766 square and one of the last remaining to contain both lowland and montane forests.  The major activities at Kibale include; chimpanzee tracking and nature walks that took place between hours of and , most importantly, Airtel’s 4G is available at this spot.

After a day of sharing their sweet moments at Kibale and Kagororo, the passionate travelers sealed their day at Gardens Restaurant located in the heart of Fort Portal town, where they had their supper before hitting the road to Kasese.

“Good morning from Kasese! Looking forward to what Day 2 of the #Airtel4GTour has in store” Kakai, one of the bloggers tweeted before kicking off day 2 of the trip.

The fresh fired up crew resumed the #Airtel4GTour on Thursday as they drove to Mpondwe, the Uganda-Congo boarder and yes, the residents are already living in the future, experiencing Airtel’s 4G connection.

Despite the Kasana and the desire to take a cold bath, nothing could stop the determined travellers from visiting their planned destinations. The group continued to the trip’s last destination, Queen Elizabeth National Park which is crossed by the world’s main latitude, the Equator.

What a disappointment!! It was discovered that the equator monument was broken during the road construction but this didn’t stop Edna Ninsiima from doing something for the gram. Plans to have it re-constructed are apparently underway.

“It’s now official, Airtel is 100% 4G” the bloggers repeatedly wrote, spoke, after taking this trip. Who knows? It could be on their minds as well.

This is a standard mobile technology that stands for “Fourth Generation” after 2G and 3G mobile technology. It has an improved wireless hotspot internet access that enables you access rich content and multimedia applications. It also allows the user to download heavy files and high definition multimedia content at the same time.

Below are more photos from the trip;

[In Pictures] MAK Guild Campaigns Kick Off in Style