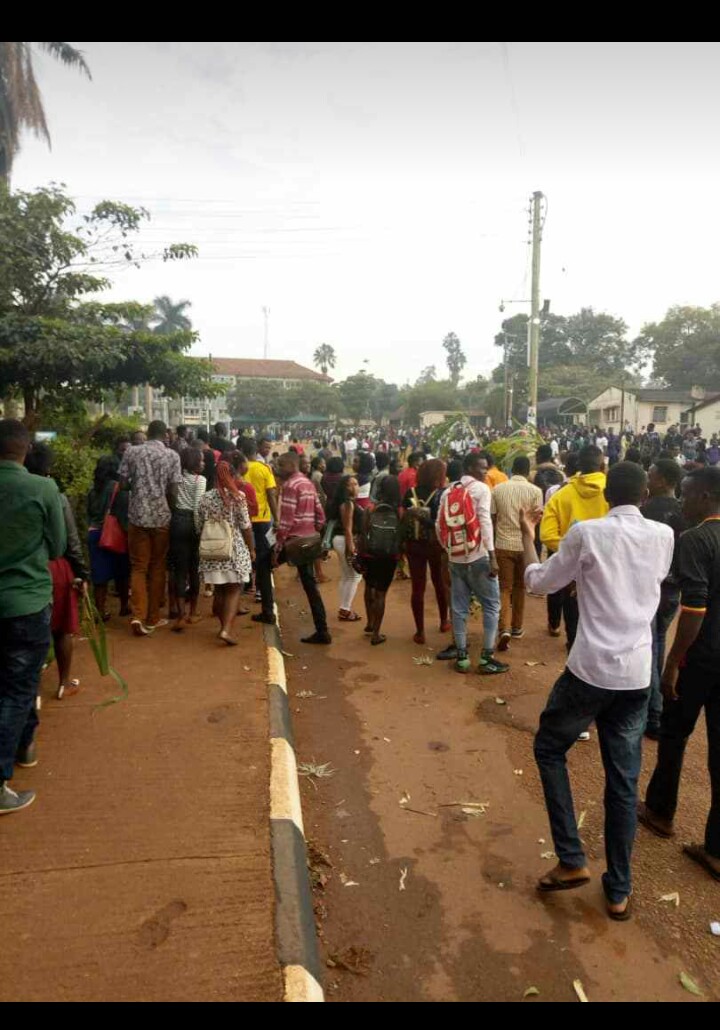 I agree immediately that grabbing that fateful teargas canister just before it exploded was perhaps not the best decision you should have made at that time. But as far as victim-blaming you is concerned, that’s where I will stop.

During my time at Makerere University I participated in over 4 strikes. Almost all of them had something to do with the various fees private students were required to pay by a certain deadline. None of these strikes had anything to do with me because I was a State-sponsored student. Every basic need I wanted to study was being taken care of by the State. Yet somehow, this was not a good-enough justification to avoid strikes.

In fact the only strike I never participated in and chose to stay in my hall room instead, policemen were deployed in the hall corridors. They had a field day engulfing the entire hall in a plume of teargas. I was caught up on the 3rd floor, choking. I could neither run out of my room into the corridor, nor jump out the window because the officers were also stationed in the quadrangle just below my window. On this only day that I had decided to remain neutral about ‘matters that didn’t concern me’, Police officers ensured that at least they turned me into a victim.

I may not have been able to articulate my reasons for participating in strikes that had “nothing” to do with me at the time, and in fact if anybody asked me why I was participating I could easily have answered that “it was out of boredom”, but now I know the reason. It was ironic that the ordinary Ugandan parent on whose taxes I was studying was routinely faced with situations where they could not guarantee the education of their own children at campus. I saw the trouble that many of my close friends, who were not only privately-sponsored but taxpayers too, went through to be allowed in an exam room. By all measures, this was not okay. So I had a moral obligation to stand in solidarity with those responsible for my ‘privilege’.

It’s possible that when you woke up yesterday you had no intention to join any strike against the new, unfair Tuition Policy that threatens to automatically discontinue any student at KYU who will not have paid full tuition and functional fees by the 12th week of the semester. How you ended up in it, then, is a question even you probably can’t answer. The strike may have had nothing to do with you, but for some reason you showed up at the frontline to fight alongside your less privileged comrades. That matters.

In the next few days as you lie on your sick bed nursing what remains of your arm, you are likely to feel useless and full of regret for your “recklessness”. But in the complicated future ahead when you wake up alone in the night and stare with disillusionment at the stump that now remains where your wrist previously stood; when everyone seems to have forgotten about you; please remember this:

The morning of Thursday 28th/3/2019 did not find you dipping your hands into public funds. You were not a robber in the night breaking into somebody’s shop. You were not a land grabber helping yourself to an orphan’s property. There are 1000 other crimes you were not doing. This is what you were doing: When you saw an injustice, you didn’t keep your arms folded like so many of us do. Instead, you grabbed this injustice without thinking twice, and hurled it back at those responsible for it. It doesn’t matter what made you grab that teargas canister, but history will remember you as one of those who showed up when a common injustice had to be resisted. It is unfortunate that you lost your wrist in the process. As the routine now is in our country, you ended up falling victim in defence the defenceless. That matters.

You may have had all reasons to remain indifferent to the plight of underprivileged students; an indifference immortalised by your own Deputy Vice Chancellor Prof. Fabian Nabugwomu who remarked just after your wrist was shattered, that, “I am not concerned for poor students. It isn’t my fault that they cannot meet the financial obligations on time”, but you chose to be different. You may have no capacity to afford a prosthetic wrist, but live in peace knowing that the last thing your hand did before it exploded in your face, was to fight for just and fair treatment of underprivileged students. That matters. I don’t know the time or the day or the year, but I am sure that your ‘accidental’ sacrifice will be rewarded tenfold at some point. Take heart.