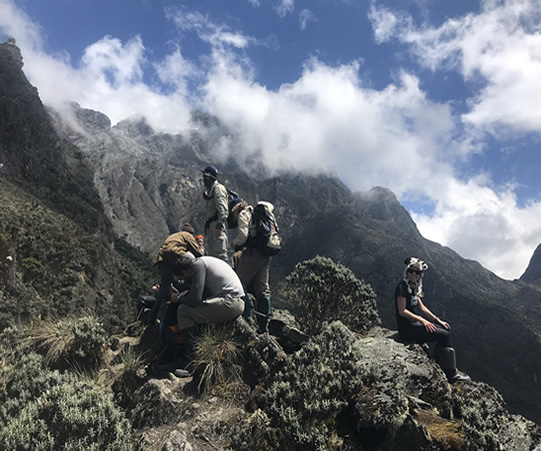 Rwenzori expeditions is a department under Primate Safari Experiences Limited a local safari company that specializes in Primate Safaris & Mountaineering tour in East Africa & Central Africa for unique experiences. We are fully incorporated under the Ugandan laws and licensed by Uganda Tourism Board.

When planning a Rwenzori Mountaineering tour, take a note that there are two hiking trails that are used by travelers to summit to the Peak of Rwenzori Mountains which is the second highest mountain in Africa. Rwenzori expedition’s offers ultimate & unique adventure tours to Margherita peak in Uganda. We have been running tours since 2017 leading the key route to summit. Find the complete comparison tours available for 2022 /2023.

Trekking in the Rwenzori Mountains

There are three treks available to suit all levels and needs, from one-day jaunts in the forest to 10-day treks with technical climbs. The 7 day Rwenzori Climbing tour is the most populartrek done at Rwenzori mountains National Park. Mountain climbing expeditions can ably use a chain of basic huts and campsites Enroute to ascend the Mountain from a vintage spot at Kilembe and Nyakalengija.

The peaks are accessed via two routes: the Kilembe Trail and the long-standing Central Circuit that starts from Nyakalengija village. For those short, on-time there’s also the two- to three-day Muhoma Nature Trail, a 28km circuit set up by UWA in 2012 that’s a shortened version of the Central Circuit.

This is so challenging and a seven-day climb will give you a rounded tour of the high Rwenzori. Just from the trailhead at the Mihunga, the route rises the Bujuku Valley via Nyabitaba for the acclimatization before arriving at the peaks. The clients will join the central circuit after the Bujuku that passes the Scott Elliot as well as fresh field that goes through the Mubuku Valley. The climbers can also scale the snow peaks and many might consider the extraordinary scenery which is a plenty reward for the efforts.

Climbing Margherita Peak via the Central Circuit (with RMS)

To reach Nyakalengija, from where the RMS trek starts, you will have to take the national road from Kasese to Fort Portal for 12 km and then take a track, not far from the town of Mubuku, on the left side of the road. There are then more than ten kilometers to travel on a road that is passable in all seasons, although water flows from all sides during the rainy season.

Departure in the morning from the RMS office. The first hour’s walk is through cultivated land before arriving at the official park entrance where we start to follow the Mubuku River through the forest to its tributary, the Mahoma River. After fording the river, you start to climb a steep path through the ferns to Nyabitaba Hut on a ridge. You will certainly be accompanied by the call of chimpanzees, colobus, blue monkeys and the superb Rwenzori touraco.

A long day of walking. We climb up the ridge to the junction of two trails and then descend through the ferns to the Bujuku River which we cross by a suspension bridge. We then enter the bamboo forest to climb a slippery and rocky path to the abandoned Nyamuleju hut, a good shelter for lunch. From here you are in an extraordinary heather forest and the first giant lobelias appear. From there, count another 2 hours to John Matte Hut.

Day 3: John Matte Hut (3 505 m) – Bujuku Hut (3 960 m): 5 hours. Behind the hut, we enter an area of high altitude swamp that we cross sometimes knee deep before fording the Bujuku River to bypass the lower Bigo swamp by the right bank. A 90-minute climb through the forest then leads to the upper swamp, which is easily crossed by a wooden footbridge. After a long walk, we reach the glacial valley of Bujuku Lake which, on a clear day, offers an enchanting panorama of Mount Stanley, Mount Speke and Mount Baker. You will then have to cross another swamp to reach, at the end of a grueling day, Bujuku Hut.

From Bujuku, we start again in the mud before climbing steeply through a forest of giant ragwort and climbing a fault with the help of a handrail. We then approach Scott Elliot Pass, which we cross on the fifth day. From here, the more adventurous climbers scramble along a slippery trail to Elena Hut, at 4540m, below Margherita Peak, Africa’s third highest peak (509m).

Departure around 2h30-3h in the morning for an attempt to climb. It takes 4 to 5 hours of climbing through glaciers and slippery rocks to reach the peak, provided that your body is well acclimatized to the altitude and the (sometimes) extreme conditions (negative temperatures, wind, fog…). After the souvenir photo, we go back down to Elena Hut for a healthy lunch, and then descend to Kitandara Hut via the Scott Elliot Pass (4 372 m) and its spectacular views.

We start this day with an hour and a half of muddy crossing through the Fresh Field Pass plain (4 282 m), remarkable for its expanses of coloured moss. Then a long, slippery, steep and spongy descent allows us to emerge in the high valley of Mubuku. We will have noticed in passing the rock shelter of Bujongolo which served as a base camp for the Duke of Abruzzo’s expedition in 1906.

This double stage allows you to stay within the 7 days/6 nightstour planned by the RMS if you have climbed a summit. Below Guy Yeoman, the trail descends steeply following the Kichuchu walls through a heather forest. You then have to cross the Mubuku River, once by fording it and again by a suspension bridge, to reach Nyabitaba, the hut of the first day. From there, you can choose to spend the night or directly attack the additional 3 hours of descent to Nyakalengija.

This is the recent opened Kilembe trail that rises in the southern slopes of the Rwenzori from a trailhead at the Kilembe just near the town of Kasese. Kilembe Trail is a hit among trekkers. Organized through Rwenzori Trekking Services, this company has both lifted the standards and breathed new energy into trekking in the Rwenzori’s. While treks to the main peaks are further away compared with the Nyakalengija route, it receives glowing reviews for its professional guides, quality equipment and safety measures, as well as comfortable mountain huts along the route.

This route is along the Nyamwamba Valley that goes through the glacier lakes and the spectacular viewpoints before joining the central circuit at Lake Kitandara. The standard route also shows Mount Baker has got scenery that makes shorter treks. The tours can be booked through Rwenzori Mountaineering services and Rwenzori trekking services.

Climbing Margherita Peak via the Kilembe Trail (with RTS)

The trek to Margherita Peak takes 7-8 days. Although it can be done in 7 days, RTS recommends to its clients to do the tour in 8 days (see below) in order to facilitate the acclimatization to the altitude. The rates and itinerary are the same whether you opt for 7 or 8 days.

Regular ascent through the forest where birds, plethoric, and primates (colobus, samangos …), whether seen, spotted or heard, should be at the rendezvous. Once at the Sine Hut, don’t miss the Enock waterfall, set in a photogenic green setting.

After the start, at about 8:30 am, expect a nice steep climb, sometimes quite muddy, through the bamboo (among other plants…). Then you will follow a ridge, go down and then up on a path where mosses, lichens, rivers, tree heathers and mist contribute to the fairy atmosphere of the place. From Mutinda Hut, you can climb Mutinda Lookout (3,975m) for spectacular views of Kasese, Lake George and the surrounding peaks.

Exhausting day in the mud and on the steep slopes leading to the Namusangi Valley. Jumping from tussock to tussock, admiring the waterfalls and being ecstatic in front of the giant lobelias will be the order of the day.

During this stage, you will link, via the Bamwanjara Pass (4 450 m), the Bugata and Hunwick camps (the latter is named after John Hunwick, the Australian director of RTS). Along the way, you might spot the malachite sundew with its beautiful livery feasting on the lobelia flowers. Giant ragwort will also brighten your journey.

This section of the trek is on a common trail with the Central Circuit and the Kilembe Trail. You will walk along the beautiful Kitandara Lake, set in an enchanting setting, before starting the ascent of the Scott Elliot Pass (4 372 m) and then reaching the Margherita Hut, known for its chilly nights and for being located at the very place where the Duke of Abruzzo, Luigi di Savoia, bivouacked during his expedition, in 1906.

The day’s schedule is similar to that of RMS (see above), except for the huts, which are different. The departure, several hours before dawn, is scheduled in order to avoid, as much as possible, the clouds piling up on the highest point of the park, generally announcing snow storms, from mid-morning. The glaciers of the Rwenzori, due to the melting caused by global warming, require more and more technical skills. Those who are not ready to tackle the 200m section at 60° angle on the Margherita Glacier will be able to fall back on a rocky eminence offering a superb panorama over the Democratic Republic of Congo and the ridges of the massif. This is the longest day of your trek.

The eleven kilometers separating the two huts will lead you to the Olivier Pass, at an altitude of nearly 4,500 meters. After the initial three kilometers of climbing, you will pass under the Weissmann peak (4,620 m) – which can be tackled by hikers still unaware of it for an extra US$20 – then reach the Nyamwamba, a capricious river flowing over Kasese, before descending to Kiharo Hut via moraine and peat bogs.

As on the first day of your trek, you will again cross the dense forest that adorns the deep valleys and frames the torrents where the tumultuous waters of the Rwenzori cascade. The trail is magnificent and will take you through streams, around waterfalls and over mossy rocks. For the record, it took the RTS team six years to find a way through this steep, watery and vegetated maze. The forest is teeming with life and visitors can see or guess at the presence of duikers, damsels and monkeys. The park exit is 12 km from Kiharo Hut and the Rwenzori Trekkers Hostel in Kilembe is 15 km away.

Among the top leading agencies in Uganda offering Rwenzori trekking is Rwenzori expeditions that has experienced and skilled team that will ensure that you summit to the peak with their help. The Rwenzori Mountains are accessible via two trekking circuits: the Central Circuit, which begins at Nyakalengija and the Southern Circuit also known as the Kilembe Trail. The best way to experience the Rwenzori is to choose between these two circuits.