They are the hands behind the famous tweet hour dubbed #RTHour. Many tweeps around Uganda have for long, longed to see, understand and ask them a plethora of questions; ranging from professional to personal. This team has finally been fished out. Campus Bee Uganda reveals to you, Joan Kuteesa, Jason Nahabwe and Raymond Kasese the brilliant team of young Ugandans.

Who is @thekerororist and what inspired you to join twitter?
I did sciences for one term then I went to arts in high school. I was the Kerororist while at campus at MUK. I used to make the best punch (liquor), People used to call me that, even on Facebook I used to use that. So on twitter at first it was Kerororist then I changed it to @thekerororist. In 2012 there was a girl, we call her the ‘She Devil’… she’s called Shiela. She’s the one who introduced twitter to me. I saw her phone, and then asked her, “What’s this thing.” I opened up an account but I wouldn’t tweet so much since then it was alcohol (at campus)… I didn’t have time for tweeting. I started tweeting frequently when I left for Kyeyo in 2013 and became the Nkuba Kyeyo guy.

Joan what enticed you to join twitter?
I had a blackberry Storm, it had a twitter app, so one time I was bored and I opened up the app, I did what we all do. To me it was a game of numbers, how many followers can I get.
On twitter my first friend was Chris Onume. By the time we met, he was still down there, although was familiar with all the bigwigs and I wasn’t… so it became like a competition. All my tweets had his element, like how he was doing his stuff. Guys used to think I was a guy; for some reason guys thought I had a dick I don’t know why (laughs). Till they met me at some twitter party.

Who’s the man behind this re-tweet hour and the main idea behind this concept?
Raymond was the main man. The whole concept of the RT hour was to help our own tweeps garner more impressions by retweeting.s Ugandans. During the early years, Ugandans on Twitter used to re-tweet funny and nice tweets from unknown tweeps outside Ugandan but these normally lacked ingenuity and couldn’t be related to our local environment. So I was like “what the hell! I am not losing anything, let me just do this,”… actually it was a one man thing at the beginning.

I would get off work, get back home and just do that, or most times while on the train from my home to my workplace would be approximately one hour, so I would get absorbed into my music and just start re-tweeting. And also, I wanted to start appreciating nice tweets from Ugandans since most are authentic. That’s it simple.

How did you meet and garner up your RT hour team?
Raymond: Actually there is a guy called Jude Mugabi. He is a loyal fan of RT hour and one of the first reigning stone heads who realised what I was doing. Mugabi advised me to get more guys so I asked him to help and source for me. I wanted him first but he turned my offer on grounds that he was busy working on some project although continued to endorse Nuwaha and Jason. So I asked Jason who accepted. And he was flexible since with the tweet hour you have to be flexible. For one hour your life is put on hold. For Joan I asked Jason to outsource (scoffs while speaking) you know I like to delegate. And there she is, Joan. She does it well and she is even my boss now.

Why did you choose bigwigs around to join your RT hour team?
Raymond: You don’t have to pick a bigwig. Then for Joan.
Raymond scratches hard his bare head as he tries to dig deep into his memory banks minutes before he narrates about her (Joan) entrance to the team resurface

It started on Women’s day when we asked girls to take over the RT hour but they failed to do it. This was after we received a complaint that we used not to re-tweet female tweets. So we contacted @Jinnytesi, @triciatwasiima and Angelika and asked them if they could do the #RThour. Angelika pulled out but the other two accepted to do it. They did it for one day, but they couldn’t do it perfectly. They said they found it hard, @Jinnytesi confesses that it was hard. So that’s how Joan came on board.

What do you base on when choosing tweets for the RT hour?
We have basic rules; No soccer tweets, no music tweets, no company promotional tweets and then no conversations and these guys who steal tweet, you quote someone’s tweet, its not yours unless like it’s a nice troll. If it’s a troll you have to give it respect. ( bows head while saluting) Some trolls have 100 re-tweets. And what most people forget we read through all those tweets. We don’t base on RTs to go onto the RT Hour, that’s why we have the MY Tweet Of the Day. Something can have two re-tweets but it’s the Tweet of the day. Something that makes us laugh. It doesn’t have to be something of 100Rts.

How true is the statement and view of many that RT Hour is biased and only encompasses tweets from BIGWIGS?
When you say we Re-tweet the usual accounts that’s true, we are not going to deny it. At one time people complained we changed and re-tweeted random guys, but its hard because you don’t even know the accounts, you don’t know their handles so it was hard. There are those popular guys like Nuwaha, Duncan, Akamwesi, Beewol, Conrad and Hansel. With Hansel we gave up on Hansel we said Jesus take the cross. Hansel is really good, If you are to re-tweet, you can Re-tweet the whole timeline and we can’t do that. But we think he has a lot of time on his hands. We are trying to find a way of getting out to people who are not common should we call them SMALLWIGS i.e. those who are trying to start up but have nice tweets. Like if you have a friend who has nice tweets but is just starting up, you need to re-tweet them so that we see them on your timeline for those we follow.

What’s your advice to smallwigs?
Ok the good profile photos and nice looking photos may work on campusers but we personally aren’t going to follow you because you have a nice photo. Be yourself and see if you will get there. The whole sex thing on twitter isn’t new; there were some people who used to do it way back, like Red Lips and @Jinnytesi. They did the whole sex thing and it worked for them but they grew up. People have jobs they can’t be tweeting that stuff anymore.

People see this program as that of opportunistic fellas and early cashouts, How true is this?
We didn’t start it for the money; maybe we can commercialize it since at some point you need to get money.

Won’t the new twitter update of giving highlights to users who were offline affect your relevance?
Not really because RT hour is like a sieve, we pick out what’s cool; and besides everyone disables that feature.

Where do you see UOT in 15 years?
People should drop that idea of not appreciating, we are going nowhere. Then about twitter topics, not everyone should jump on it if they are ignorant about a particular topic. If guys continue in their categories, to do their thing right, yes we aiming for good.

Recently you guys have been down, what’s the reason behind the silence?
Many issues. I (Raymond) the thing first was my simcard, and then the network, my network is rubbish at home. Also I had a weird Nokia phone that was disturbing me and I was busy at work setting up my business. So you come back home tired or at the bar. You cannot just leave your boys at the bar to start re-tweeting or sometimes I will be like she’s going to do it or Jason and neither of us does it.

Joan: When it gets to 11pm or even 10pm and I haven’t read through, I don’t do the hour. Sometimes we have traveled and are away.
Jason: Oh yes, I’m off #RTHour for a while because of school. Books piled up and I needed to lay off some commitments so I could have more focus to keep knocking straight A’s. But not to worry, I will be back on the hour starting July.

With an increase in parodies on Ugandan timelines, how do you differentiate parodies from authentic accounts?
Raymond: There people who tweet normal stuff then there people who tweet weird stuff, like that Deilah guy/babe. But for normal you can know this is girl, this is girl stuff. You just see what people are tweeting.
Joan: I can feel a female. 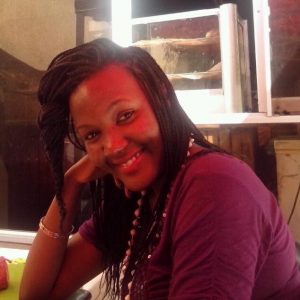 Joan how many d*cks have you felt on female accounts?
Laughs it off shyly

Probably @BloodyMascaraa, it’s a girl at some point, then at some other point her tweets are so insensitive and you think it’s a guy. It’s like @Jinnytesi those are the girls that are up there. The rest just tweet their feelings.

Joan you’re an opinionated lady on twitter does it contribute anything to RThour?
Joan grins lays back to her seat with the SERIOUS!!! Owwh gaze!! when asked why her TL is serious and mainly composed of inspirational tweets..

Yah it does. I read through the tweets and if I can feel it, makes me laugh and question. I retweet. You know when you are going through your phone there is that one tweet that you will stop on read twice and then go on. That usually makes it to my tweet of the day. I tweet anything that comes up in my head and I really don’t care.

What’s your relationship status and what’s your connection to Linda?
Am not a lesbian for starters, Linda is my best friend she put her handle in my bio by force, when I remove it she puts it back. 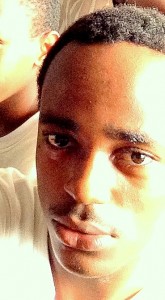 Any three tweeps you think will always bring a smile to your face?
Amused and Astonished, Joan tries to distance herself from the question. She bites her upper lip while she tries to lean forward on the table.

Joan: @CollinSay he is not funny but he’s a cool guy, his tweets are sensible so if I could, I could DM him, that one is on point. FredTumusiime that’s a guy I would like to sit down with a cup of coffee and have a long conversation. @sheinfinite I met her at Kampala Restaurant week.
Raymond: @ddzyre, @boobsiez and Mary Nantongo
Jason: @dian_kwase, @La_Ju_melle, @silwaxxy, and so many more, I don’t know about you guys but these people give me life mehn.

Jason how do you balance school and time on twitter or social media generally?
It’s simple. You just have to make time for everything. It’s only that this semester, things got out of hand a bit. But it’s all under control now and besides, #RTHour keeps getting better each and every other time so.