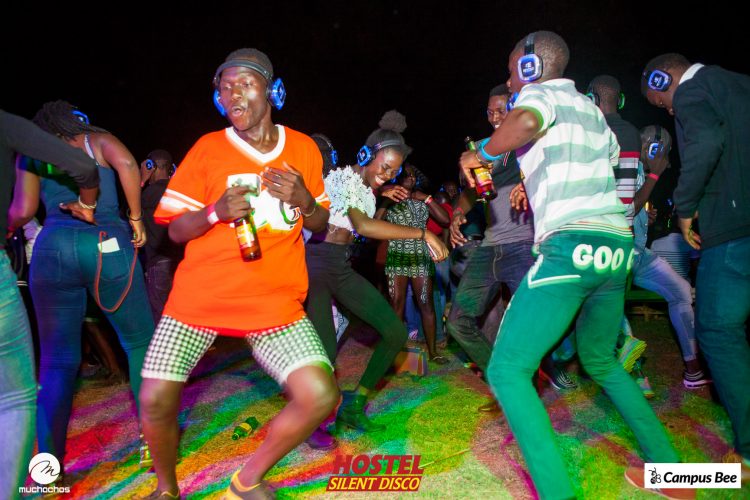 Gulu University on Saturday 30th March was treated to the first ever Hostel Silent Disco when yours truly, Campus Bee and Muchachos took the Bell Jamz Silent Disco experience to the Nun-owned Regina Hostel.

The hot lineup of both Kampala and Gulu deejays mashed up the night spinning tunes that Gulu university students grooved to all night long.

Being a late crowd, the students started streaming in at 8pm and by 10pm, one could barely get where to stand as the Hostel compound was filled to the brim to dance silently to tunes from deejays; Tony, XZYL, Jerry, Q, Fem, among others.. The students uncontrollably sipped on ice cold newly introduced 330 ml Bell Lager bottles leaving the bar tenders wondering if G-Town is a hotbed of turn ups!

The highlight of the night was when DJ Fem, from K’la, who was on Red Channel kicked off his set with traditional folks songs like Acholi’s favourite, Angellina, Teso’s all time greatest, Emali and Bugisu’s Kadido tunes. These folk songs literally set the venue on fire as some students took off their already drenched shirts to dance away. We got you all the shots from Regina Hostel, Gulu. Fyi, the Hostel Silent Disco will this weekend head to Kabale University for yet another epic night.

The Bell Jamz Silent Disco is a brainchild of Campus Bee together with Muchachos, sponsored by Bell Lager. It seeks to entertain university students through by taking the surreal silent disco experience to their hostels.