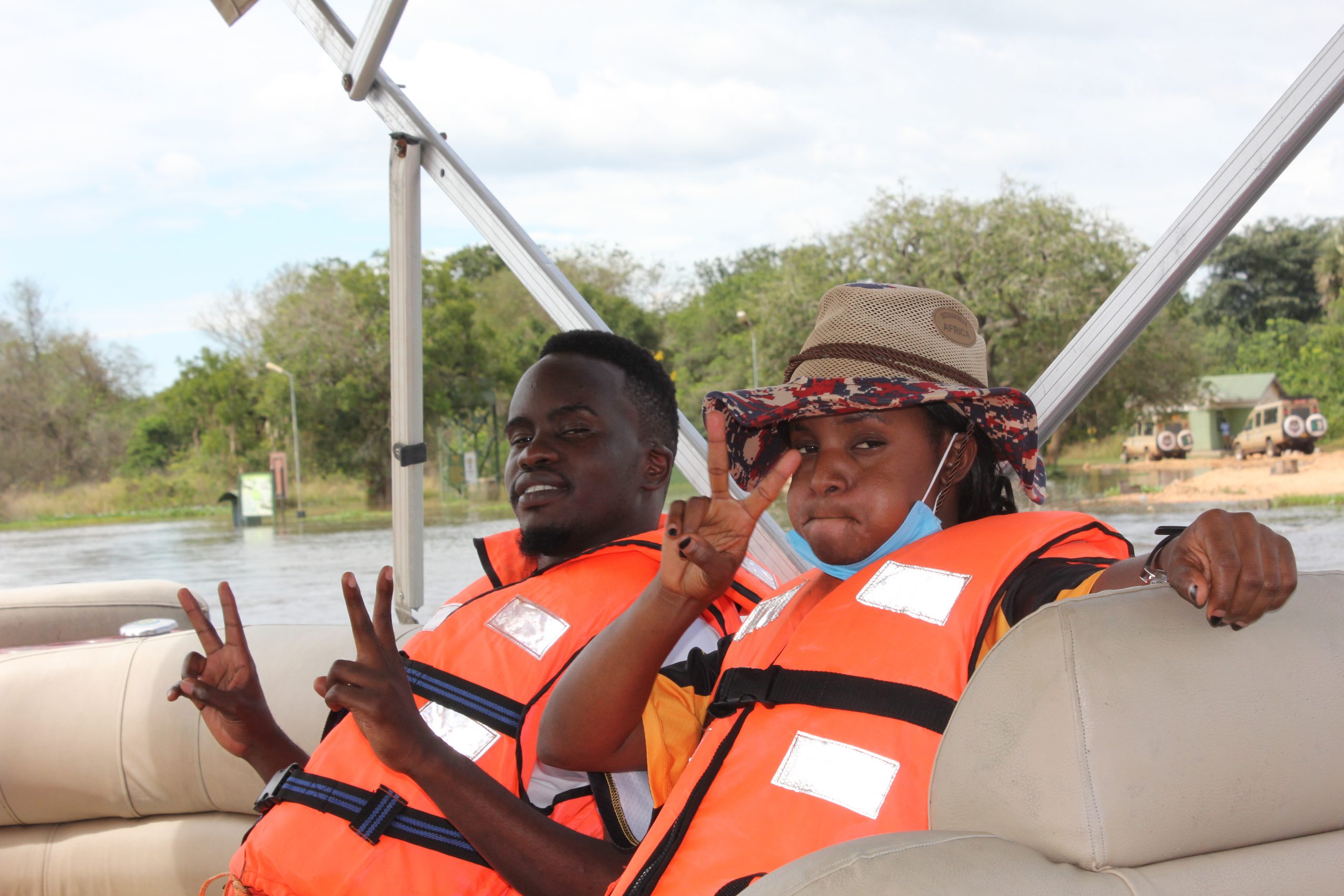 Marvin Ayebare, a student at Makerere University and Richard Ndagije, a former student at the same University and a Digital Executive at Next Media were the first winners of Nile Breweries’ domestic tourism campaign dubbed ‘MyUgandaMyNile’ and were treated to a weekend of fun and exploration as they toured Uganda’s biggest national park, Murchison Falls National Park.

The two winners enjoyed two nights at Chobe Safari Lodge, a game drive around Murchison Falls National Park and a soothing boat ride on Victoria Nile where they got a chance to view the foot of Murchison falls and a variety of water creatures.

For a perfect experience, each of the winners were allowed to invite three of their friends with whom they travelled and experienced Uganda’s beauty.

Winners and their colleagues set off on Friday morning aboard Matoke Tours’ Safari vans for a 7-hour drive to Chobe in Nwoya District. Along the way, they had a chance to see different people of different cultures; from Baganda in the Central region, Banyoro in the Bunyoro region and the Acholi in Acholi sub region.

Along their way, they made several stops at a number of locations like River Kafu for a road side muchomo, Karuma bridge where they viewed the frothy waters of the Nile and some animals including baboons, warthogs, giraffes, and some birds before reaching Chobe.

At Chobe, a late lunch was served, winners checked in to their rooms and experienced exciting treats at the lodge which included their state of the art swimming pool, luxurious rooms and a buffet dinner.

The day was crowned off with a camp fire where they joined other visitors as they enjoyed Nile Special beer at the bank of River Nile.

After a heavy breakfast at Chobe, MyUgandaMyNile winners took on a game drive around the iconic Murchison Falls National Park which covers 3,893 square kilometers of land.

They were able to see and learn about different animal species like the Jackson’S hartebeest which is the favorite prey for lions, Uganda kobs, waterbucks, elephants, giraffes, hippos, and many bird species.

The most exciting of the birds were the white backed vultures which were found feeding on a dead hippo while it’s orphaned baby looked on. This was nature in its fullness.

After the game drive and lunch which was served at Paraa Game Lodge, next was the main event of the day; a boat ride to view Murchison Falls.

It’s 17 kilometres from Paraa game lodge to the foot of the falls. While on the water, our winners spotted a crocodile which was resting at the river bank, classes of hippos, many species of water birds and the scenic Murchison Falls before heading back to Chobe later in the evening.

Day three, being the final day of the excursion was majorly to give our travelers an opportunity to tour and experience Chobe Safari lodge, a five-star lodge that hosted American rapper Kanye West and his wife Kim Kardashian while they visited Uganda.

“Since domestic tourism was allowed, I’ve been trying hard to find a way of traveling my country and #MyUgandaMyNile campaign came as a blessing to me. Throughout the trip, I learnt a lot about the wild, had fun on the game rides, the boat cruise to the waterfall, the food was so delicious, basically everyone and everything on the trip made it interesting and I want to thank Nile special for this opportunity,” Marvin Ayebare, one of the winners said on departure day.

Richard Ndagije who travelled along with his girlfriend said; “It was a fantastic road trip and I would like to thank Nile special for the high level of organization exhibited. The Trip’s program was really fantastic and I enjoyed every bit of it.”

The MyUgandaMyNile campaign is still continuing and the next batch of winners will be travelling to Kapchorwa, Eastern Uganda to visit Sipi Falls National Park next weekend.

To be one of the winners, you need to buy and enjoy Nile Special, take a picture with your beer and share it on social media using the hashtag #MyUgandaMyNile.

Two posts with the most engagement will be selected and the winners will enjoy one of our trips with three of their friends.