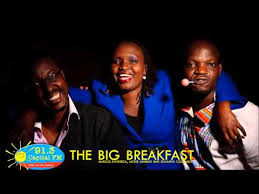 Not all of us will get to be have a screen in our rooms and catch the latest episodes of Prison Break, or listen to the releases of Mr. Eazi on MTV Base. The babes won’t get the chance to watch William Levy in his new soap Opera. We just love our radios. We buy ourselves hoofers that multitask simply to be able to access that radio program we love. Below are some of the radio shows that campusers would substitute their TV with.

The Morning Breakfast. Literally all radio stations in Uganda will have a session every morning from 6am to 10am. You can conduct you morning discussions with background sounds from your favorite stations with presenters engaging their listeners in real pertinent issues including the society, economy, politics and lots of humor too.

American Top 40 or commonly known as AT40 on Saturday’s with Ryan Seacrest. XFM radio station syndicates the radio program, an independent song countdown live as it airs on over dozens of radio stations worldwide. The countdown of the US best songs of the week runs from 10am to 1pm every Saturday.

Capital Gang on Capital FM. Many of us will find politics a very boring topic to talk about, but listening to the guests usually called “Gandstas” speak on this radio program is quite interesting. Ofwono Opwondo is always invited to defend the government, being the spokesperson. They will discuss all the trending stories in Uganda and the world, whether political, economics, crime, police, elections name it. You find many campusers glued to this program every Saturday from 10am to Midday engaging the guests through social media.

News Bytes at the top of the hour. Every time an hour clicks, radio stations will keep us updated on the trending news stories around us. One does not have to wait for 1pm, 7pm or 9pm as the Television stations usually do to keep us informed.

Late date. There are those who think they are screwing up in their relationships and will want advice from the love doctor. Campusers are usually are tuned in to their favorite stations between the hours of 10 and midnight just to listen to the “Late Date.” Callers with real problems call the host about the issues they face, who will then hold both parties in a conference call and advise them. On Fridays, Capital FM will even have single girls calling the station and reading their numbers live for the lucky better half to call.

Sports updates. Who does not like sports? Campusers will be glued to radio stations simply to wait for an update about the next game Wenger will be expected to win but does not, or the new player Man-U hopes to purchase. Others will be expecting to listen to the teams playing simply to know when to place their bet.

Big Bangers on Hot 100. The station will have club bangers being played every week day from 7 to 9 pm. This is one of the reasons you will hear some dudes room blazing the latest jam of Major Lazer ft Nasty C and Jidenna when he cannot even afford himself a data connection to keep updated.

Tamale Mirundi shows. Some stations are simply too defiant to obey the orders of UCC not to host the former presidential adviser. Campusers are always given a doze of laughter listening to this man rant about how he does not depend on the government.