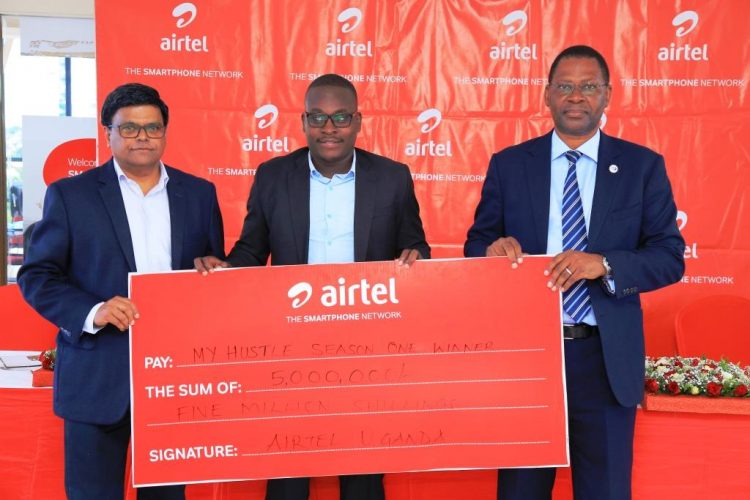 This morning, Airtel Uganda celebrated the end of a successful season of their testimonial digital series – ‘My Hustle’. The season finale also saw the telecommunications network identify and recognise the most internet-driven, most innovative and most impactful business through both public vote and a panel of judges.

Edrine Sempebwa, a 27-year-old Economics graduate and founder of SpareWo – an online shop for motor spare parts; Pius Enywaru, the founder of Fastlane Media & Communications and George Nsamba a self-taught filmmaker and proprietor of The Ghetto Film Project all walked away with UGX 5,000,000 each for Most Innovative Hustle, Most Internet-Driven Hustle and Most Impactful Hustle respectively. All the 29 personalities received a certificate of recognition from Airtel Uganda, a router and assorted branded items.

Launched in September 2018, ‘My Hustle’ is an online-based series featuring different budding entrepreneurs running small and medium enterprises powered by the internet and Mobile Money. Since its inception, the series has given 29 personalities and small businesses, such as a dog trainer, a visual artist, a lawyer earning from a food business, a FinTech company, e-commerce shops for car spare parts and building material, a customized wigs entrepreneur, a scented candles maker and many others, an opportunity to share their stories and market their products in under 2 minutes.

Mr. V.G. Somasekhar, the Airtel Uganda Managing Director applauded the 29 entrepreneurs for their remarkable work in the areas of job creation and utilization of technology to improve their lives.

“World over, technology has been recognized as a major catalyst for development of individuals, communities and businesses. Airtel Uganda is proud to be pioneering a similar cause in Uganda through this very popular series that identifies, recognizes and shines a light on internet and mobile wallet driven small and medium enterprises,” he noted.

“Upon the completion of reliable and affordable countrywide internet connectivity, the next major step is assisting and empowering people to reap its benefits across all sectors regardless of the socio-economic divide.”

“Every year thousands of youth graduate from University, excited to join the work force. Unfortunately, most of them spend the first few years unemployed. With innovations such as Airtel’s ‘My Hustle’, entrepreneurs get the right platform market and showcase their business to the market,” he said.

“To this and many more other initiatives, we are proud to associate with Airtel Uganda as development partners towards realizing the Uganda Vision 2040.”