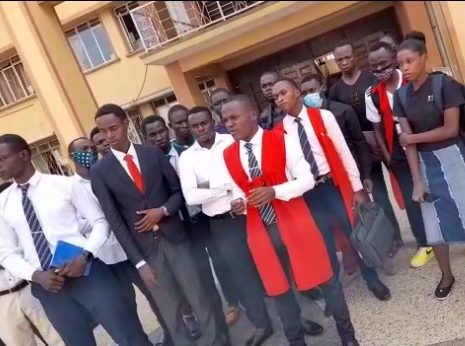 Makerere University government students on Friday June 10, stormed the office of the university bursar demanding for their delayed allowances.

According to Yusufu Waidembe, the former leader of Makerere University Government Students Association (MUGOSA), the university has overly delayed to release their allowances in addition to the fact that the second semester money is expected in halves.

“We are not accepting the university’s plan to give us  allowances in installments, the government gives them full money, let them release it at once,” Yusuf complained.

He in addition said they have given the finance department an ultimatum of three days, up to Tuesday to have given out Food and Living-out allowances.

“We need the money by Tuesday next week, if not released, we shall use another language of a strike which they understand better,” Waidembe added.

Meanwhile, in a document issued by the office of the guild president Ms. Shamim Nambassa June 9, allowances for government sponsored students are expected early next week.

“Students on government sponsorship should expect their first batch of allowances by early next week,” Shamim’s letter read in part.