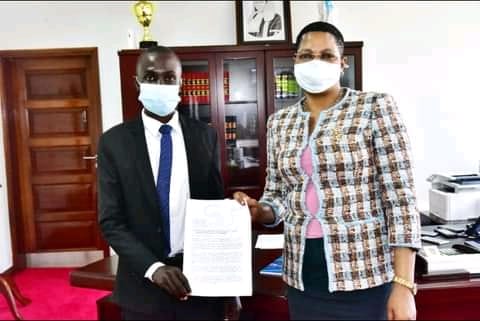 As the country is preparing for the president’s speech to the country on matters concerning COVID-19, a notable student from Bishop Stuart University Mbarara has petitioned parliament to prioritize school reopening.

Mugabe Alex Kayabuki, a student leader at the Mbarara based University has intensified pressure on government to have the institutions of academic learning opened as soon as possible.

In his petition he handed over to the deputy speaker of the parliament of Uganda Hon Anita Among, Mugabe requests the government to reopen schools since international schools in Uganda are operating freely.

‘’Schools should be re-opened because some students/pupils of the rich continue to study whereas those of the poor are at home waiting for the official opening by Government,’’ he stated.

Last week, Mugabe mobilized his fellow BSU students and carried out a peaceful demonstration demanding school reopening for all students.

Currently Universities are open for only medical students who are in clinical years while others are waiting for President’s say on reopening.