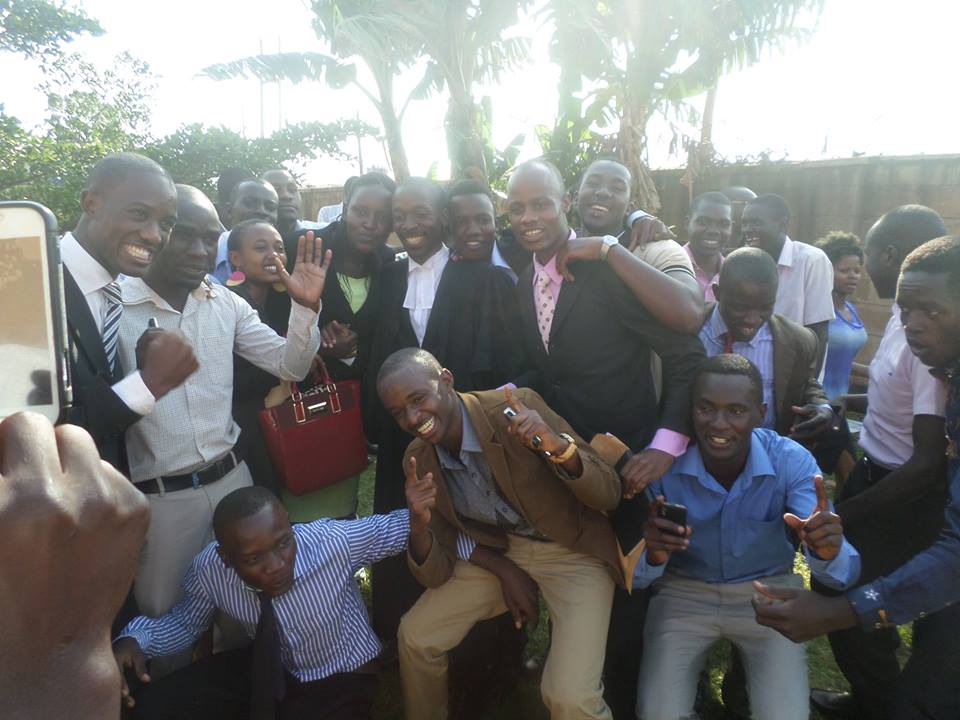 “Court can’t sit back and fold its arms while the rights of the applicants are being violated” was the chilling message that Judge Elizabeth Nahamya of Nakawa High Court sent out to Nkumba University in a strongly-worded ruling she made while issuing a temporary injunction against a mandatory 200k fine and other conditions that had been unconscionably and illogically slapped on the applicants by the University, pending disposal of the main suit, High Court Misc. Application No.8 of 2015.

In granting the temporary injunction that the students through their formidable Counsel Isaac Kimaze Semakadde of the Centre for Legal Aid had prayed to court for, the Judge authoritatively dismantled each objection that the Respondent’s Counsel, Joseph Luswaata who looked on helplessly through out the ruling, had raised against the petition.

She took cognizance of the fact that the 200k fine complained of applied automatically to all day students regardless of whether or not they had participated in the strike. This, Counsel Semakadde had submitted, was something that introduces the concept of collective guilt which is totally unconstitutional. The Judge did no better than agree with Counsel Semakadde’s reasoning.

The Judge overruled Respondent Counsel’s prayer that the petition be thrown out on grounds that the UNSA had no locus standi since it was not an incorporated company, holding that according to the Civil Procedure Rules, it can sue through its court-appointed representatives and this was the case in the present matter.

Judge Nahamya also held that indeed the student applicants stood to suffer irreparable damage, one of the grounds on which a temporary injunction can be issued, if the injunction would not be granted. This, she reasoned, was in a way that the students’ future lies in the hands of the University. If, she added, it went ahead to lock them out of exams so that they would have to wait until the next year, it would cause them unspeakable damage in a way that it would waste a lot of their precious youthful time and they would miss out on so many job opportunities which they can not be compensated for.

The Judge followed Court’s ruling in the case of Tusingwire v Attorney General, in which it was held that “If there is an infringement on the right to a fair hearing as contended in the main suit, the Court before which a temporary injunction is sought should be inclined to grant it.”

Besides, she held, Court can also decide the matter by relying on the balance of convenience. The Balance of Convenience is such that court considers the inconvenience the applicants are going to suffer if the injunction is not granted vis-a-vis the inconvenience the Respondent is to suffer if it’s granted. In this case, the judge found that that balance was in favor of the applicants. She strongly stressed that any decision affecting human rights must be made in strict accordance with the rules of natural justice which the Respondent had failed to prove that it had adhered to prior to making its decision.

She cited the African Charter for Human Rights, applicable in Uganda, which directs that every individual has a right to have his case heard. This is further highlighted by Articles 28 (1), 42 and 44 (c) of the Uganda Constitution. “I agree with opposing Counsel that the denial of a fair hearing by the respondent was against the law,” she held, consequently granting the temporary injunction that the applicants had sought for.

In his address to the press after the ruling, an exuberant Counsel Semakadde remarked that: “Students should be treated with the dignity that they deserve. Its costly to mistreat vulnerable students [as Nkumba had done]. Student Activism is not a crime.” Esomu Simon Peter, one of the suspended students, ecstatically declared that justice had been served.

The main suit is tentatively set to be heard in late April 2015. This unprecedented case challenging a decision of an institution to collectively fine all students regardless of whether or not they participated in the act it’s penalizing them for will go a long way in serving as an ominous warning to all institutions which may dare to follow the same course of action that God, through Court, is watching and any mis-step will be firmly dealt with by the full brunt of the law.