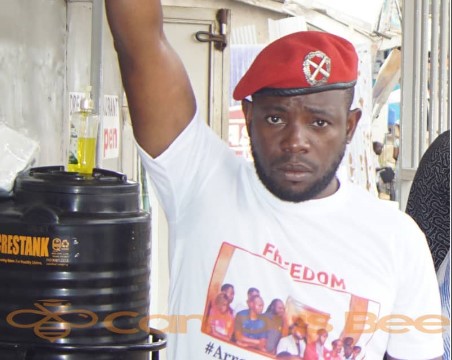 David Musiri, NUP’s head of institutions has thanked his ‘lover’ Doctor Stella Nyanzi for standing with him while in prison.

Musiri, who was released today May 19 together with other student-protesters, thanked Stella Nyanzi for boldly supporting him during the trying time he has been through while at Luzira Prison.

“I want to thank Doctor Kizza Besigye, the iron lady -my lover, Doctor Stella Nyanzi. I salute you and love you,” Musiri said after being released.

Doctor Stella Nyanzi attacked a court clerk at Buganda road court only identified as Abubaker in her Facebook post dated May 18th, 2022 in which she accused the latter for wanting a bribe before releasing the students who had been granted bail.

“After remitting six hundred thousand Uganda shillings to pay bail fees of my lover and his prison mate who lacked local sponsors of their bail, magistrate Owomugisha Sienna released them unconditionally on bail today. She left her chambers and the paperwork with her court clerk Abubaker. Abubaker refused to deliver the release order because he wanted a bribe,” part of Stella Nyanzi’s post reads.

However, John Solomon Nabuyanda a human rights defender who was crucial in the release of the students refuted the accusations. Nabuyanda says no bribe was issued to anyone to secure bail for the students

“As one of the persons who has been following up to ensure that students are granted bail, I am happy that they have finally got bail. No bribe has been forwarded to the magistrates as you have seen in allegations allover social media.” Nabuyanda said.

“We delayed to deposit the money in the bank and that is why we didn’t receive them yesterday but today.” He added.

Musiri David and other student protesters were granted bail yesterday Thursday May 18th, 2022. Unfortunately, they were not released due to a delay in bail fee payment.

The students were finally released today Thursday, May 19. These are among the 15 who were arrested as they marched to parliament in protest of the skyrocketing prices of commodities in the country.