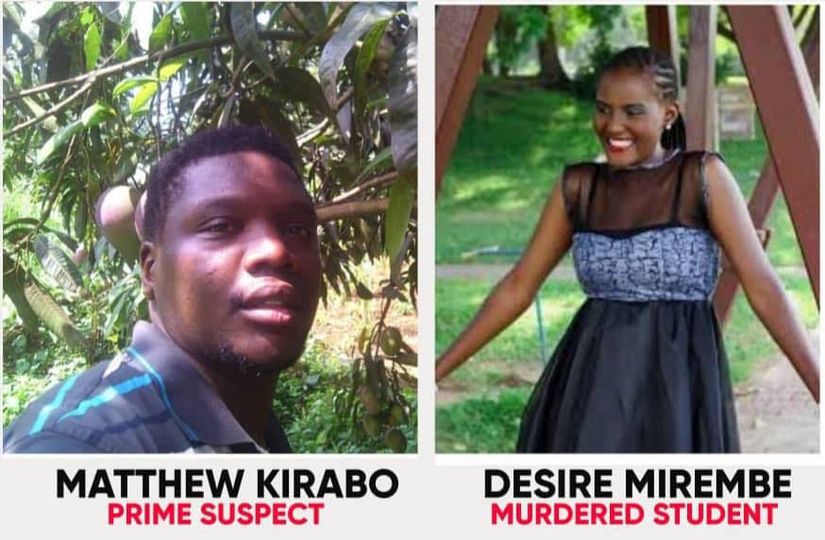 Matthew Kirabo, a former Makerere University student who was convicted for the murder of his 19-year old girlfriend Desire Mirembe has asked court to give him his passport so that he can go abroad for a Masters Degree.

Kirabo, who was released on bail to complete his undergraduate course at Makerere University is currently working at Mulago Hospital, according to his LinkedIn account.

On Tuesday 11th May 2021, Mukono High court heard an application where Kirabo was requesting to get back his passport which was confiscated as one of the bail conditions. During the hearing, his Lawyer Kato Isaac requested for more time so that he can submit more documents for the application.

When asked where his client was, Kato told Court that Kirabo could not make it yet he was sleeping in his car that was parked outside within the Court premises. Shortly after hearing that Kirabo was not around, NBS investigative journalist Daniel Lutaaya switched on his secret camera and went outside to confirm.

Lutaaya captured the sleeping Kirabo in his Lawyer’s car before he was whisked away from the premises after learning that his move was exposed.

Mirembe’s family members, who were trying to be strong eventually broke down in tears after learning that Kirabo was sleeping in his car as their daughter’s body continues to decompose 6 fit underground.

“He finished his dregree in Makerere, my daughter was murdered in 2015 the case has never been heard. I went to the Principal Judge about four times, they are telling me that the Judiciary has no money.” Emmanuel Musoke, a father to the deceased said.

Jonathan Damze, a brother to the deceased also took to his tweeter to show his disappointment in the Judiciary.

“It has been 6 years now, my sister’s case has never been heard but the murderer can go ahead and apply for the return of his passport so that he can go and pursue further studies. Uganda Law Society and Police this is a very big failure of the authorities.” Damze tweeted.

Since Mirembe’s death, Court has sat once to hear Kirabo’s bail application when he wanted to finish his studies at Makerere.