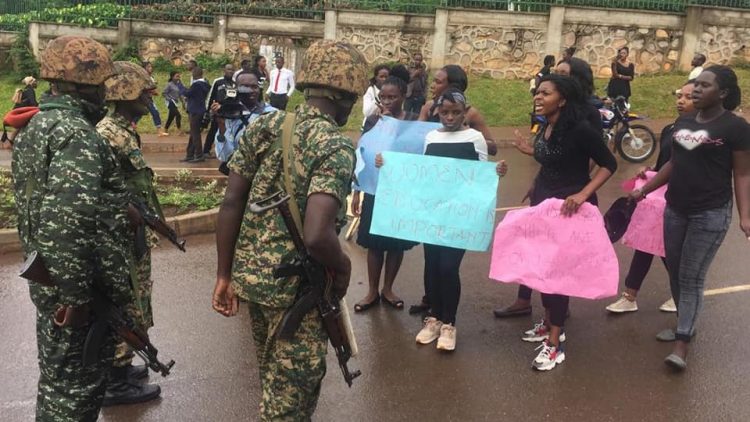 Makerere University has always had tuition strikes in the past years, most of them however were just about the tuition deadlines. Makerere students had never organised a strike because the tuition was a lot, this is the first time.

Makerere University female student leaders, led by the Guild Representative Councillor of the School of Psychology Siperia Mollie, this morning took to the streets to protest the cumulative tuition policy of the university that increases the amount of tuition to be paid every year by 15%.

In five years, the tuition fees for every course at the university will have increased by 75%, just 25% shy of a whooping 100% increase in tuition fees. This is what is troubling these female student leaders.

They intended to march to the office of the president and demand for the reasons as to why he directed the university management to increase tuition to what they termed as “exorbitant figures.” But alas, they were intercepted barely before they made it out of the university.

“The University Management has always told us the exorbitant annual tuition increment was a State Directive by the President of the Republic Of Uganda. If this be the case, then the future of our Nation is dead. We, the current cohort of students cannot sit back and watch our siblings fail to join Makerere University because of exorbitant fees.” Makerere University Guild President Julius Kateregga said in a statement.

We cannot completely ascertain his claims but being the top most student leader at the Ivory Tower, with a more than enough information resource envelope, we believe he is authoritative on such a claim. The Guild President also sits on the university governing body, the University Council.