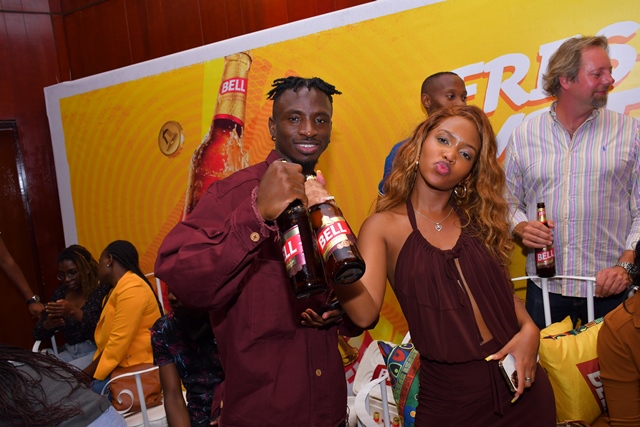 Bell Lager’s Brand Manager, Matilda Babuleka, DJ Bryan – one of the brand’s ambassadors and other officials from the renown beer brand turned up for the show that ushered Ugandans into this year’s Independence Day.

On the same show, Bell Lager officially unveiled singer Derrick Ddungu, aka Rickman Manrick as their brand ambassador. Rickman, who also doubles as a professional footballer for Sävedalen IF, a Swedish second-division team turned up the vibez when he stormed the stage to perform some of his top tunes.

Shortly after being unveiled as the #FreshVibez brand ambassador, Rickman revealed how proud he is to be associated with a brand like Bell Lager. The singer was later joined by his girlfriend Sheilah Gashumba who took the Mpola Enjoyments a notch higher by tasting Bell Lager for the very first time.

“Went to NTV to support Rickman Manrick on his new endorsement with Bell Lager!! We had #FreshVybez and a lot of fun. I also got to drink Bell Lager for my first time and I must say it’s smooth, loved it.” Sheilah revealed.

Also present was Swangz Avenue singer Vinka who delivered an electrifying performance on the show.

Below are some shots;