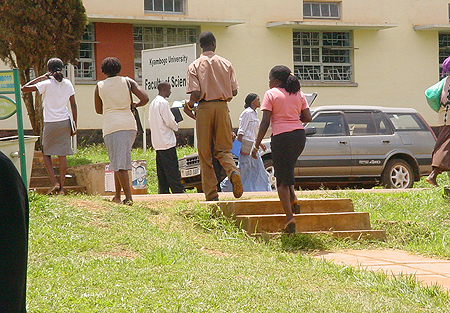 Students of Faculty of Science going for lectures at Kyambogo University. COURTESY PHOTO

Kyambogo University has admitted more than 11,500 former A-level students to various courses on private sponsorship, for the 2016/17 academic year.

According to the list released by the academic registrar’s office at the weekend, the number of private students admitted per course ranges from one to 502.

However, this list only includes applicants coming from A-level on the “direct entry” scheme. Other categories, such as diploma-entry scheme, sports, and disability, are not yet ready.

Students can pick up their admission letters from the respective faculties as early as next Monday. Each applicant is expected to present his/her identity card from their former school, O-level result slip as well as A-level result slip or testimonial.

Students do not need to pay any money to get the admission letters. However, officials are encouraging them to endeavor to pay their fees before the semester opens.
According to the university calendar, the freshmen are expected to report on Saturday August 6, ahead of their orientation week between August 8 and 12.

Additional reporting by The Observer.

Phaneroo to Mark Two Years With a Mega Celebration in August