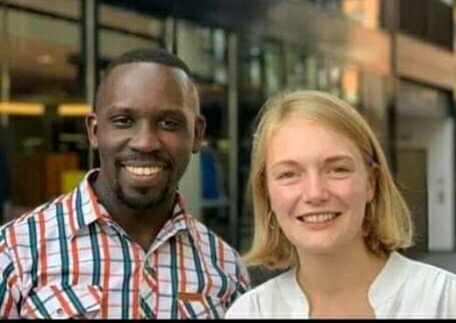 A Ugandan woman only Identified as Lilian Tumusiime is not happy with People Power spokesman and third year Makerere Law Student Joel Ssenyonyi after a photo of him with a youthful German Politician was shared on social media.

Ssenyonyi posted his photo smiling with the babe and this didn’t go well with lady whom we now understand has been secretly admiring the People Power strongman. In utter ignorance, she claimed that he doesn’t value Ugandan women and has run to whites.

“Of all beautiful women in Uganda who have all the necessary requirements a man wants from a woman, this lumpen chose to date a white lady. Kalega olutwe lukalinga Carrot, as if we don’t exist? Bavubuka kwesiliwaza nyini. Now if all Ugandan men date whites, ffe ani anatuwasa ? Twasoma, twasika, we go to church naye ela they don’t see us. Stupid moron aleega virginity,” Tumusiime posted on Facebook about Joel’s photo with the white girl.