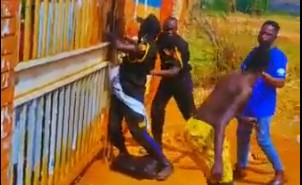 In the early evening hours of Tuesday 21st June 2022, a student exchanged blows with Pearl security guards at the University small gate.

This attracted a lot of attention from the passersby who could not believe the student’s audacity, courage and strength to fight and beat up security guards who at that time could not even secure or save him from the brawl.

Apparently, there was a football match at the East End pitch in which the student was to take part. On reaching the small gate, the Pearl security guards asked the young man to wear his mask, as they have always done with other students, and wash his hands since it’s no news that COVID 19 is back.

The student refused to do as he was told, for he clearly asked if it was the mask he was going to play and not the game. However, the guard was not going to let his authority be undermined hence he insisted the student must wear his mask.

Overcome by anger, the student hit the security guard, sparking off a fight as this guard defended himself. Another guard at the same location, seeing that his colleague was being beat up to the extent that he was nearly defeated, joined the fight to help his friend.

Oh, as they say, a friend in need is a friend indeed, the relentless student fought the guards who from the look at the situation, were losing the battle.

There has always been a cold war between students and security guards at the gate over the issue of masks. Much to everyone’s surprise, the guards who ask students to wear masks never have theirs on in most cases. It is always cold until it gets hotter, so they say.