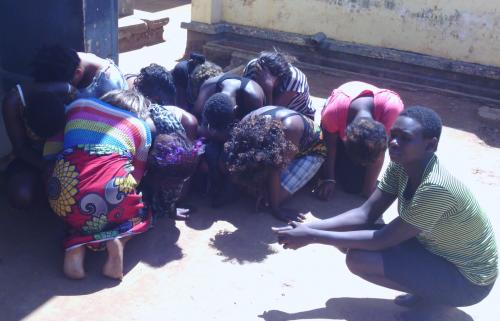 The students of Gulu University have responded to the malice that labeled them oblivious of what sex tapes in an overwhelming manner as they have resorted to prostitution to erase that allegation. They also want to be wrote about on campusbee because its quite obvious when we write about them, several other tabloids Ninjas will sneak onto our website and copy and paste but we are used to it, we are trained to be trendsetters.

Anyways, news reaching our desk is that a Gulu university student was among the 25 girls that were arrested for prostitution in the areas of Labor line, Cereleno and Konypaco all in Gulu district.


The student (name withheld) was later released by the police to attend her paper but police investigations are still going on because according to the citizens of konypaco, many university and secondary school students are getting involved in prostitution.

“Most of them are young girls from renowned secondary schools, and they don’t mind what age of men they sleep with as long as the pay is good. Where is our country headed?” Samson Latigo Okech, an elder in the district of Cereleno intimated to campusbee.

“ I see a good number of students from the Gulu university campus entering lodges with older men, men old enough to be their fathers; even these girls have imported the behaviors of the kampala campuses to this place”says a worker from a nearby guest house.

If those allegations are true, we need to remind students of Gulu University that AIDS is a live and walking, it will pounce on whoever is careless with their lives.

As fellow campusers, our advice to you is to seek education for it’s the only way you wil get all those things that you are getting cheaply yet in actual sense they are very expensive as they might cost you your life.