IUEA Cleaner Among over 400 that Graduated 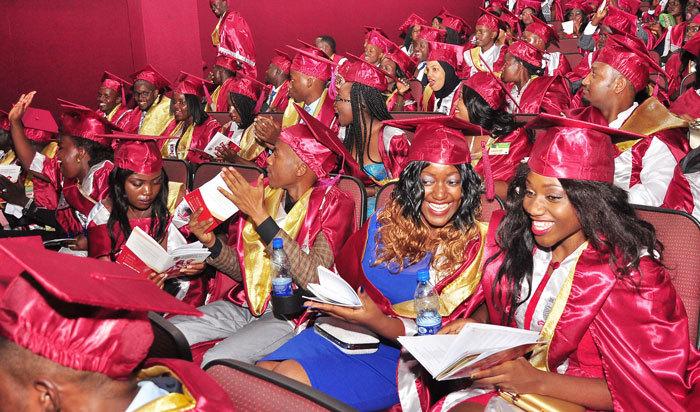 The recent graduation ceremony at International University of East Africa (IUEA) was not just a pomp affair. A closer look at it has revealed some really inspiring stories and one of them is Evaline Namagunga’s.

Ms Namagunga, 32, finished her senior six in 2005 from Jinja based St. John’s Secondary School Wakitaka after scoring 11 points in History Economics Geography and Divinity (HEG/D). Due to lack of money for higher education, she consequently got married but never lost her hope of attaining higher education.

A mother of two since then, aged 11 and 8, she has worked as a cleaner at the university since 2013 when IUEA was first operational in the country. Thanks to her resilience and hard work, the nation can boast of having one more Public Administration expert in her.

It’s from her work as a cleaner at the university that Namagunga was able to make some friends that turned her life around and helped her attain her dream.
They assured her that there was a possibility of getting a scholarship since, at that time, IUEA was offering scholarships to those unable to join University due to financial complications.

“I applied alongside very many others and I was fortunate to be among the 11 who were granted a scholarship at IUEA in 2015 to offer a Bachelor in Public Administration,” she said.

While at the graduation ceremony where over 400 students graduated in different disciplines, Ms Namagunga encouraged everyone there who could have been passing through devastating times to be patient and hopeful because like she had portrayed, anything can happen.

The IUEA vice-chancellor Dr Emeka Akaezuwa, showered the graduating students with praises and emphasised that they had got practical and life skills of survival to put to fruitful usage after campus.

Embattled Bank of Uganda governor Prof Emmanuel Tumusiime Mutebile, who doubles as Chancellor of the university and Dr Nishikant Sonwalkar from Massachusetts Institute of Technology (MIT) were among the guests present at the graduation.