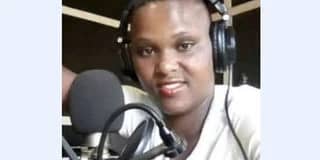 Fatuma Nekesa, a graduand at Kampala University allegedly succumbed to a lethal drug last week, days to her graduation.

The deceased who was a graduand in Mass Communication and a reporter with Eastern Voice FM was confirmed dead on Thursday by Mr Daniel Saire, the head of the department of mass communication at Kampala University.

“I have just got information that one of our former mass communication students Fatuma Nekesa was injected with a lethal drug and passed on,” Daniel wrote.

Meddie Mugwa said his fiancee visited a clinic having developed pain in her stomach and while there, she was injected with a lethal drug that worsened her condition.

The deceased was rushed to Kibuli Hospital and later announced dead.

Reports indicate that the deceased was buried immediately, that is on Thursday last week due to the the worrying state in which her corpse was.

Kampala University graduation is slated for June – few weeks away, and unfortunately, Fatuma Nekesa could not live long enough to witness her graduation.

May her soul rest in peace.