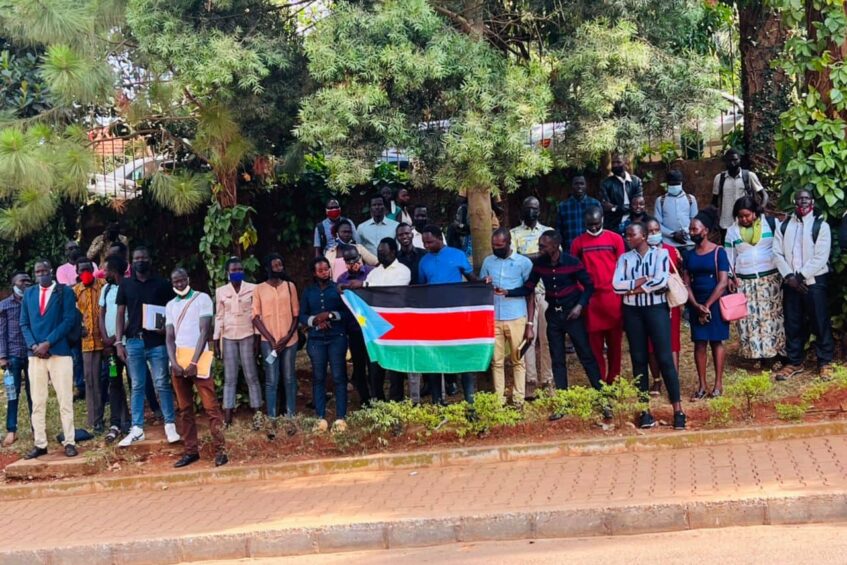 The University held its 19th Graduation Ceremony on the 23rd June 2022 at its main campus in Ggaba-Kampala.

Towards the ceremony, a section of students from the Kampala University Juba College in South Sudan petitioned the High Court of Uganda in Miscellaneous Cause No.0129 of 2022 seeking for several declaration and orders against Kampala University to issue the following;

The Applicants contended that they had been admitted to pursue different academic programs at the College in Juba, paid all fees and fulfilled all academic requirements and were cleared by the college to attend the Respondent’s 23rd Graduation Ceremony.

Apparently, the South Sudan group travelled to attend the graduation but were denied external clearance by the Respondent for graduation and were subsequently not graduated on the 23rd June 2022.

On the other hand, Kampala University through an affidavit of its Vice Chancellor Amb. Prof. Badru Kateregga opposed the application.

That however, the Respondent’s efforts towards being licensed were frustrated by the Authorities in South Sudan whereupon a decision was made by the Respondent to suspend the operations of the college by a letter dated 23rd February 2017.

He maintained that the suspension has never been lifted and that the Respondent is not privy to all the activities undertaken at the college from the date of its suspension.

He accordingly averred that the Applicants were not students of the Respondent and there is no way they could have been vetted or cleared for graduation and award of transcripts and certificates. He prayed that the application be dismissed with costs.

In a ruling delivered on the 19th October 2022, Hon. Justice Boniface Wamala held that the Applicants did not produce any documentary evidence indicating the lifting of the suspension which had been communicated not only to the administrators of the Juba College but also to the stakeholders in the Government of South Sudan.

His Lordship agreed with the Respondent’s submission that a suspension that was communicated in such a manner could not be lifted by implication especially so when the condition precedent had not been fulfilled.

Further, His Lordship observed that it had not been proven that the Respondent received any payment from the Applicants specifically on account of operations of the Juba College.

The Court also noted that it is not in public interest that the Respondent should graduate and award academic certificates to persons whose admission and instruction it did not superintend. Academic institutions are established and licensed to instruct and standards.

He thus held that the Administrators at the Juba College ought to have been alive to this duty and ought to have arisen to their calling to a standard that is expected in the interest of the education system in the Public interest.

“Now that they abdicated their duty, they are personally responsible and cannot extend that responsibility to the Respondent in absence of evidence that they were acting for and on behalf of the Respondent after the suspension of the study Centre,” the judgement ruled.

The Court finally held that the Applicants were not entitled to any of the prayers claimed in the application and accordingly the application wholly failed and was dismissed with costs to the Respondent.

“We welcome the ruling of Court which dully confirmed our position that the Juba College is still under suspension,” the vice chancellor noted.

He also reiterated that until the suspension of the college is lifted by the relevant authorities at Kampala University Main Branch, all operations at the Juba College are illegal and inconsequential.

“Students affected by the said ruling may apply to Kampala University Main Campus at Ggaba in Kampala for formal admission to its academic programmes,” he remarked.

Finally, the students who were misrepresented by the Administrators of the College were advised to seek legal redress against them individually as advised by Court.