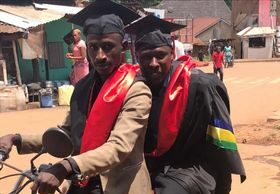 Herbert Kimunga, a philanthropist and the youngest elected LC1 Chairperson of Namubiru II Village is among the 9,521 graduands that are graduating during the ongoing Kyambogo University 17th graduation ceremony.

Kimunga has graduated with a Master of Business Administration (MBA) from the Banda-based university. While speaking to Campus Bee, Kimunga revealed that he was inspired by the writings of Albert Einstein who acknowledged that once you stop learning you start dying.

The excited Kimunga further revealed that he plans to further his studies by applying for a PhD at the University of Nairobi.

“I am inspired by the writings of Albert Einstein who acknowledged that once you stop learning you start dying. it’s upon this very notion that am applying for a PhD in the university of Nairobi when i attain adequate financing.” Kimunga said.

Since he graduated with a Master’s, the first-ever sitting LC1 Chairperson to graduate with the mentioned qualifications was among the few graduands that attended the 17th graduation ceremony physically.

Campus Bee has been notified that his Boda guy surprised him with a brand new graduation gown following this milestone.