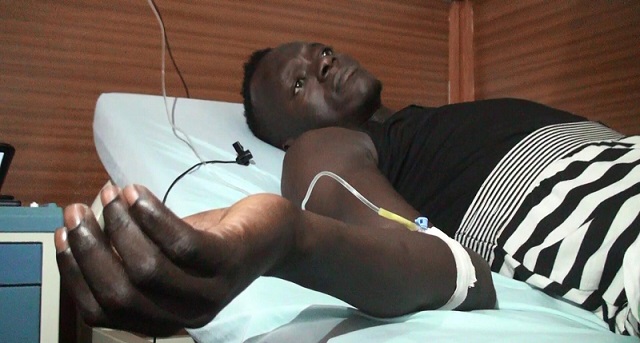 Peter Waiswa, a second year student at Kyambogo University pursuing Bachelors of Development Studies is nursing wounds at CPR Medical Center after he was beaten by his Chinese Boss at Global Paper Limited where he was working.

Waiswa started working with the company in Mbalala (Mukono) after universities and other institutions were closed due to the Coronavirus pandemic, as a way to raise money to contribute to his tuition and support his sisters under the care of their single mother, Jessica Nabirye.

His Boss only identified as Liu, the Head of the Plywood department at the company lost his temper and beat and kicked him in his private parts, which led to his admission at the hospital.

Waiswa goes ahead to explain that the boss, without any explanation assaulted him as he was lifting up plywood at the warehouse.

The Human Resource Manager at the company where Waiswa was working declined to answer to the matter and what caused it. The Officer in charge at Mukono Police Station said investigations have kicked off to determine what exactly happened.

AWWW! Phaneroo's Allan Kyobe Goes Down on One Knee