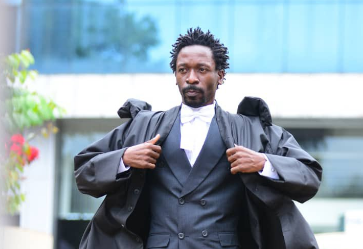 Contemporary City lawyer Isaac Ssemakadde was relentless in addressing the flaws in several legal institutions including Law Development Centre (LDC) and the Judiciary.

The physically atypical, yet astonishing counsel delivered a powerful message to students of clinical legal education on last week at Makerere University School of Law and focused on unmasking the horrors of the controversial Law Development Center (LDC).

‘Let’s keep the others for another day, and deal with LDC today —since the topic of the highly oversubscribed guest lecture was “Transforming Legal Education: The Role of an Advocate in Promoting Social Justice and Transforming Society” Isaac said.

According to Ssemakadde, LDC is the biggest fraud and a scam institution that only exists because of the law, urging the students to stop losing money on it and make smart decisions and train elsewhere.

“The lawyers who wrote the LDC statute did not go to LDC,” he said. “They were trained in the Inns of Court in London.”

The Law Development Centre was set up by an Act of Parliament in August 1970. Before then, most of the lawyers in the country had trained in Britain, under the pupillage system (an apprenticeship or mentorship program which qualifies one to practise the law independently).

The stubborn Makerere Law School students didn’t immediately agree with the ‘rasta’ lawyer arguing that they wouldn’t be able to practice without going through LDC. Ssemakadde had a suiting response involving Lawyer Male Mabirizi;

‘Mabirizi, a graduate of Law from Makerere University, is not an enrolled advocate but has become an activist lawyer, suing and representing himself in court, He has represented himself up to the highest court – the Supreme Court of Uganda, as well as the East African Court of Justice at Arusha’

To Ssemakadde LDC is a monopoly imposed by the law, which is “completely unconstitutional”.

Some countries like India do have bar examination bodies but the studying is optional or liberalized. The All India Bar Examination (AIBE) only sets the advocate’s exam to assess their capability to practice the profession of law in India. After passing the examination, candidates are awarded “Certificates of Practice” by the Bar Council of India.

It issues a curriculum three months before the exam but the advocates-to-be are free to study anywhere or not to study at all. Lawyers can sit the exams as many times as they wish until they attain a passing grade.

LDC, on the other hand, has restrictions on entry, attendance is mandatory and costly, failure rates are scandalously too high, and those who fail have only a small window of redoing the tests (moreover at exorbitant rates), after which they are condemned to the wilderness.

“There is no constitutional rationale for the LDC monopoly over tuition and training,” Ssemakadde noted before proposing a better idea.

“The law should be amended to permit a non-traditional route to the bar, for instance by receiving mentorship from Socrates or an activist like me, even though others may opt for the traditional route of being indoctrinated by a state institution like LDC.”

“Then we shall see who will win the great questions of the day: activists or the LDC guys?”

He said LDC was for the meek and humble and could not produce activist lawyers, who are sorely needed to curb the impunity of elites today.