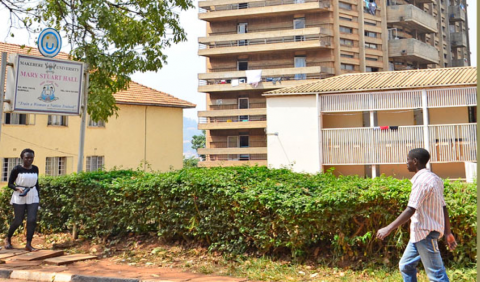 Makerere University Halls of residence (Lumumba and Mary Stuart) under their solidarity known as Lumbox came out this week to distance itself from electing representatives to the constitution review committee.

During a special meeting that was held by the University Council on Friday 19th August 2022, a report of the select committee on Makerere University Students Guild operations was considered.

It was resolved that the students Guild constitution be reviewed under under Section 69(1)(a) of UOTIA.

Therefore, a Constitutional Review Commission shall be voted for through universal suffrage in every College and Hall of residence on 27th August 2022.

The Constitutional Review Commission is expected to undertake it’s assignment for one month starting on 5th September 2022 and ending on 6th October.

However, following consultations among the students fraternity in Lumumba and Mary Stuart halls, they noted with concern that “the proposed constitution review process by university council does not only undermine building for the future as stipulated by the motto of Makerere university but also leaves the core principles of Lumbox solidarity in a dire situation.”

For ages, Lumbox solidarity has been central in championing for the rights of all Makerereans, as they claim.

“Making reference to your letter addressed to our warden dated 23rd August 2022 in which you instructed for the election of a representative to this controversial committee, we wish to pronounce to your office that;

We wouldn’t wish to undergo the same as this process leaves unrest inevitable,” the Lumbox residents wrote to the VC.

With an insight into the institution’s guidelines, it is upon this background therefore that Lumumba hall wished to pronounce its solid resolve about the entire process.

“We also understand that a constitution cannot be amended when a certain population is not represented. Protected under article 69(1) of the Universities and Tertiary institutions act of the supreme law of the land, Lumumba and Mary Stuart shall shall refrain from the constitution review process and we shall not elect a representative to the same,” the letter added.

The students also requested the wardens of Lumumba hall and Mary Stuart hall to maintain the peace they have created for themselves in the recent times and “not in any way jeopardize it by this election.”