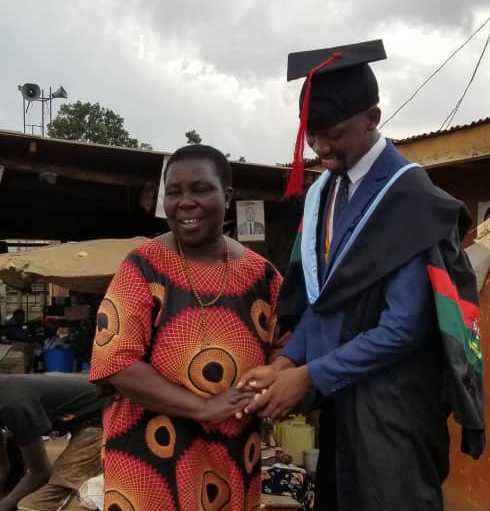 Remember the Makerere University graduate who was pictured thanking a lady in market while rocking his graduation attire? Well, Campus Bee has gathered more details regarding this humble young man.

We have learnt that the fresh graduate is Edward Kasenge who graduated with a Bachelor in Industrial and Organizational Psychology (BIOP) during the just concluded Makerere University 71st graduation ceremony.

During the 71st Makerere University graduation ceremony, Kasenge was the second best in his class with a second class upper degree.

Our drones have further established that the lady he was pictured thanking is his grandmother, not his mother like everyone thought. His  mother abandoned him when he was just one-year-old and the father disowned him.

According to reports coming in, his parents are currently fighting their way back into his life now that they see a future in him. It is said that the dad, who wants to fix himself in the picture became restless after seeing the child he disowned making big moves education-wise.

It is very important for parents to always take on their responsibilities despite the number of challenges on their table.