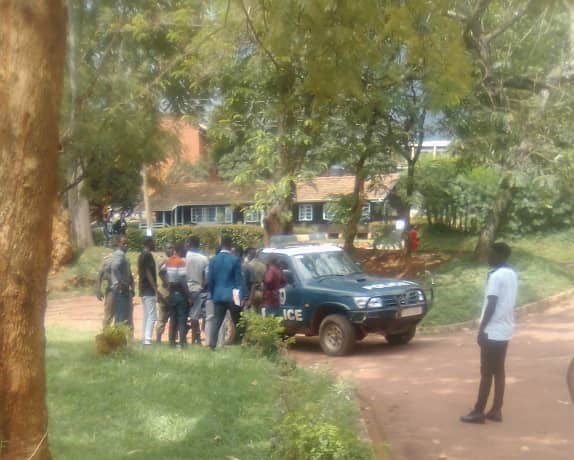 Makerere university is set to hold elections that will usher in a new guild president into the 87th guild house and halls of residences are holding primaries to select sole flag bearers.

Halls of residence are usually strong political grounds or bases for guild aspirants and many an aspirant work tooth and nail to be their hall of residence flag bearer.

Despite Mutsinzi Joseph calling off the primaries, Lumbox elders went ahead to carryout primaries a thing that annoyed Mutsinzi’s die hard followers thus the scuffle.

It’s alleged that Musiiri David came in with a number of thugs carring knives and these exchanged blows with Mutsinzi’s followers. “How can thugs come to campus. 8 thugs with knives.” an eye witness wondered.

While speaking to campus bee, National Unity Platform’s head of institutions Musiiri David said he didn’t come with any thugs but rather moved with his body guards and/or colleagues with whom they do party business.

Musiiri further asserts that he only came to attend the primaries having been invited by NUP’s flag bearer Shamim Nambassa.

On the other hand, Shamim Nambassa accuses Mutsizi Joseph for having hired thugs to sabotage the primaries.

Affande Kamulya one of the police men on scene said there is no way police can stop strangers from entering Makerere since its a public university.

With Lumbox now disunited over primaries, its not clear on whom both halls will front as their flag bearer.

Makerere university’s 87th guild election is slated for 12th November and like last year, the election will be a blended one too