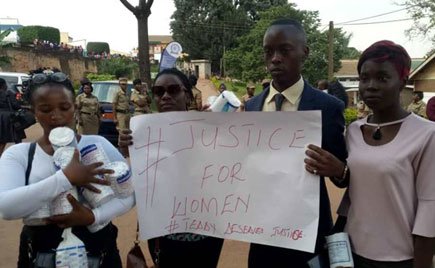 Edison Kakuru, the president Makerere University School of Education was among the nine activists that were today afternoon arrested for demonstrating over House of Prayer Ministries pastor, Aloysius Bugingo’s comments about his wife Teddy.

Bugingo recently delivered a confession in church that he tolerated his marriage with Teddy despite her having fistula for over ten years. Bugingo added that he was sexually starved for ten years in addition to buying pads for Teddy.

Bugingo’s confession was followed by mixed reactions from people who demanded an apology from him adding that he does not deserve to be a pastor.

The arrested activists who include eight women and one man (Edison Kakuru) were netted from Bat Valley Primary School where a section of women rights activists had converged to work on a petition against the pastor, with an intention of delivering it to Rebecca Kadaga, the Speaker of Parliament.

They are currently being detained at Wandegeya Police Station amid tight security. They stormed the mentioned school holding placards with words like “justice for women” among others.

Among the activists that were drafting the petition included veteran singer Sophie Gombya, who wondered how they can explain Bugingo’s acts to their little children.

“Imagine the hustle we have to go through to explain to our children such kind of behaviour,” Gombya said.

The activists want the government to punish Bugingo so that he can serve as an example to other ‘animals’ (men). After Bugingo’s statements that he wasted a lot of money buying cotton wool and pads for Teddy, the activists had vowed to storm his church on Sunday and dump cartons of wool as payback to the complaining man of God, they however didn’t show up.

Bugingo is currently pushing for a divorce to end his 29-year marriage with Teddy after discovering a younger woman.