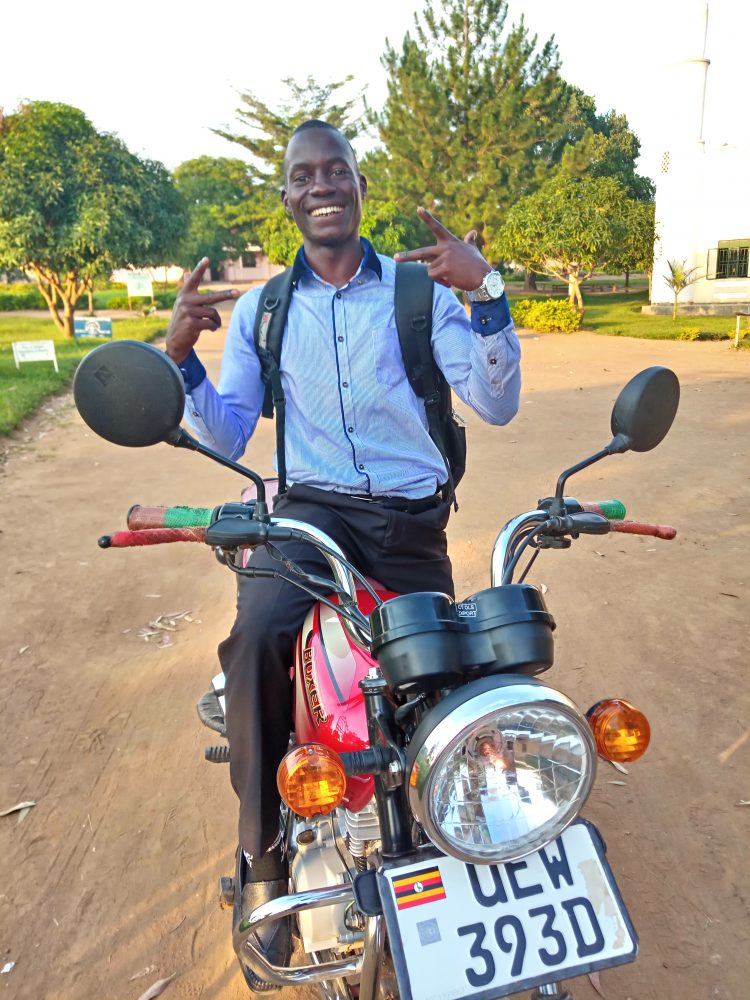 A 23-year-old student of Education at Makerere University is making ends meet through studying and riding a boda-boda at the same time.

Daniel Kabuye from Wakiso district is a scholar under the MasterCard Foundation Scholars Program at Makerere University pursuing a Bachelors Degree of Arts in Education. He joined the University in 2017 and is now in his third and final year of the program. He stays with his single mother since he lost his father when he was a child.

When he joined University, Kabuye realized that the stipend he gets from MasterCard Foundation was not enough to sustain him both during school and after he completes his education.

“When I joined University in first year, I started selling sweet potatoes in Kawempe market. However, I found it hard to balance my books and the business. Therefore, I changed to a boutique which did not end well because the person I had employed to work for me robbed me,” says Kabuye.

Despite the ups and downs in his businesses, Kabuye did not give up because he knew he needed to work.

“When the guy I had employed disappeared with all my things from the boutique, I used my savings and the stipend from MasterCard Foundation to buy a motor bike (Bajaj). That was in my second year first semester,” he says.

Kabuye adds that the boda-boda business is working out smoothly for him since he only works when he does not have classes.

“When I have a lecture let’s say at 10: 00 am, I start working at 6:00 am and go to class when it’s time for the lecture. Then I go back to work later in the afternoon and evening when the lectures are done,” he adds.

According to the State of Uganda population Report 2018, 1.2 million youth in Uganda between the ages of 15 and 29 are idle. For many reasons, graduates are seated in their parents’ homes without anything to do or even earn an income.

Unlike most students who think that school should come first and then looking for a job later, Kabuye thinks that one should start planning for after school when they are still in school.

“When I analyze the current status here in Uganda, I don’t think we have jobs. So, it’s up to one to think creatively of what to do to earn a living,” argues Kabuye.

Kabuye is glad that from the money he earns out of his boda-boda business, he can even send at least some amount to his mother. He says that when the semester is going on and he is not working full time, he earns at least six hundred thousand (600, 000) shillings per month and at least one million (1,000,000) shillings during the holiday.

He also adds that involving yourself in different kinds of activities creates a smooth path for you because you meet more people who could be of help in the future.

“My first semester here at campus was full of hardships. I had to start working. Now that I am working, I have interacted with many people and I now have another experience besides school. I think besides the books, students should work so that they get connected to different people, get ideas and make important connections. If they want a breakthrough, they should start now,” he said.

Kabuye believes that one can become successful not just by waiting to get a job after school but by starting small and let the job contribute to an already existing business. He also has a farm of around 76 goats back at his home which he hopes to broaden into a bigger project.

“With my education course, I cannot achieve all that I want. We are among the least paid profession. So, I needed to plan ahead” says Kabuye.