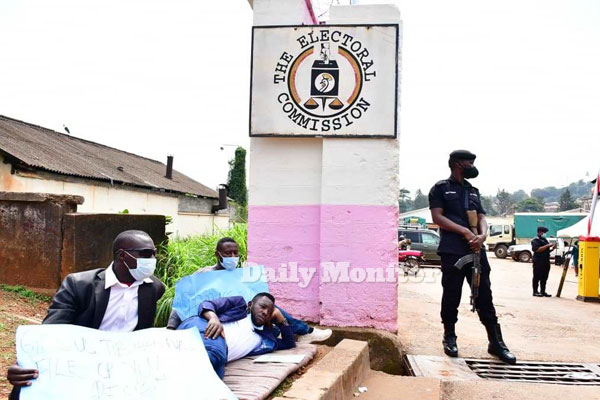 Musiri was joined by other NUP diehards who believe that it is only fair if the electoral body shows the country Museveni’s papers just like they rushed to display Bobi Wine’s, who is also running for the same office.

Musiri, who showed up carrying a mattress vowed to sleep at the offices until the requested documents are displayed for him to see.

The Makerere student was recently denied the flag to represent the National Unity Platform (NUP) in the 2021 general elections. After re-evaluation, the party decided to give the flag to the incumbent Allan Ssewanyana who was an independent.

The Bachelor of Commerce scholar is well known for taking part in demonstrations whenever he feels like Makerere students or Ugandans in general are not treated fairly and he has been arrested multiple times for it.

His last arrest happened when he publicly condemned  the involvement of Police in the just concluded Youth elections but he was bailed out by his rumored lover Dr. Stella Nyanzi, a former Makerere researcher.