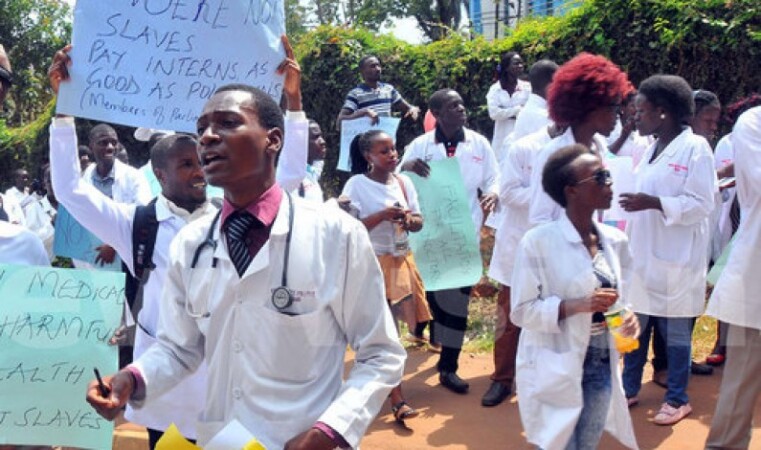 The Federation for Uganda Medical Interns (FUMI) through its President, Dr. Nabwire Mary Lilian has alerted the Minister of Finance, Planning and Economic Development of an imminent sit-down strike next month if the interns’ monthly pay is not raised.

The increment in the pay for all medical interns was a presidential directive that was supposed to start in July but has been ignored to date. President Museveni had directed that intern doctors and pharmacists get paid UGX 2.5m and nurses and midwives paid UGX 2.4m, half of the recommended of the fully appointed officers respectively, starting July 2021.

“To date, there has been no response from MoFPED as regards to the implementation of this directive. Medical interns received 750,000UGX as their net monthly pay for the months of July and August. Furthermore, we have reliably been informed that Ministry of Finance released the usual amount of money for this new quarter and Ministry of Health plans to pay 940,000 UGX gross pay (750,000UGX Net pay) to Medical Interns for the month of September as this is what they received from MOFPED. We would like to categorically distance ourselves from any institutions and or individuals that seem to slow down government programs in this case,” a FUMI letter read.

It is against the above background that the Medical interns resolved not to continue with their work until their demands are met.

“Medical Interns nationwide regret to inform you that we will be laying down our tools with effect from 6th November 2021 and stay home until the President’s directive is respected and implemented,” the letter added.

The Ministry of Finance is yet to respond to the threat posed by FUMI. The medical interns have been concrete in supporting the struggling health system in the middle of a pandemic hence deserve all the attention.