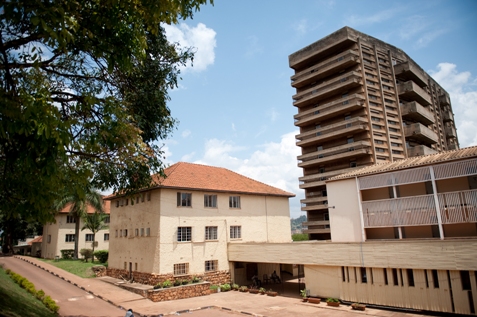 Despite the fact, that Makerere is said to host lots of dreadful things, bedbugs, dilapidated buildings; some people out there find Makerere university beautiful enough that it acts as wedding reception to some couples. Every weekend atleast a couple hosts it’s guests at University Hall or at Livingston hall to a sumptuous reception dinner.

We aren’t here to discuss weddings, and beauty, but did you know that MUK campusers gate crash these weddings??

OJ a MUK student and resident of Livingston is a reknown gate crasher, when he reported in first year, he carried a small jacket, the one (wrongly called a coat ) a suit jacket. Whenever the Hall hosted a wedding he’d wear his ka coat Hehe and go sit among the bakoo. Some times he’d attend the entire wedding and be rewarded with food, together with others, they’d formed a brigade of gate crashers who’d ambush the The reception during meal times and eat like starved pigs.


Our OJ, last Saturday hadn’t realized there was a wedding, so he’d washed his jacket in preparation for the next weekend, however one of the members ‘gate crashers community‘ came and informed him towards the time for serving, OJ got excited and hurriedly borrowed a jacket and joined the food queue.

Unknown to him, the head cook had been observant and patiently waited for OJ who’d come armed to the teeth, with a fork in his socks, at the serving point, the head cook simply, covered the giant saucepan and carried the food and placed it under the table; looked up at OJ and co and said ; “Emeere yawedewo” (literally meaning food is finished)with finality ringing in her voice. The brigade, sadly tried to protest, and OJ swore he was abandoning the gate crashing career. OJ is just one of the many students who have turned these weddings a ‘meal changer’.

Freshers, This How You Can Hook Up a Third Year Babe