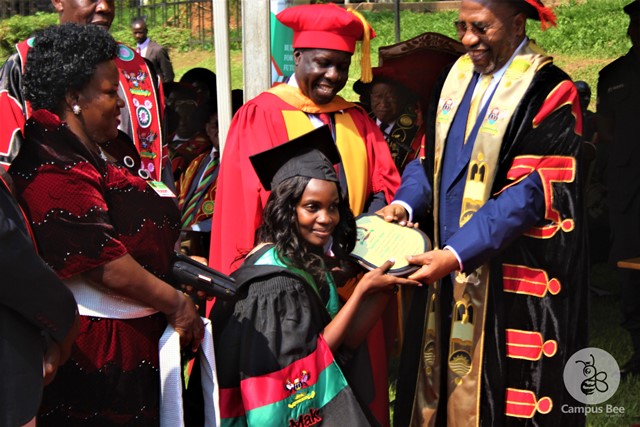 Namayengo is the 22-year-old student who emerged the best overall science graduand with a CGPA of 4.83.  Namayengo has been pursuing the four-year Bachelor of Conversation Forestry and Products Technology under the Department of Forestry, Biodiversity and Tourism (FBT), School of Forestry, Environmental and Geographical Sciences (SFEGs), CAES.

Namayengo received the plaque from the guest of honor, Prime Minister Ruhakana Rugunda who was representing President Yoweri Museveni. She later shook hands with the Minister of Education and Sports Hon Janet Museveni.

Namayengo, who was accompanied by her parents to the ceremony was seen taking a group photo that included Janet Museveni, Ruhakana Rugunda, the Chancellor Prof Ezra Suruma, the Vice Chancellor Prof Barnabas Nawangwe, her parents, among other officials from the university.

During her speech, Janet Museveni congratulated the graduands before acknowledging the hard work of female students who have topped this year’s humanities graduands.

“This is the first time the number of female graduands are surpassing male students since the inception of the university,” she said before adding that “a university graduate is looked at as a responsible and important participant in society.”

The education minister also told the Makerere University researchers to find out why the number of female students at Masters and PhD levels is still lower.

VIDEO: MAK Graduand Who Used to Repair Shoes Claps Back at Haters