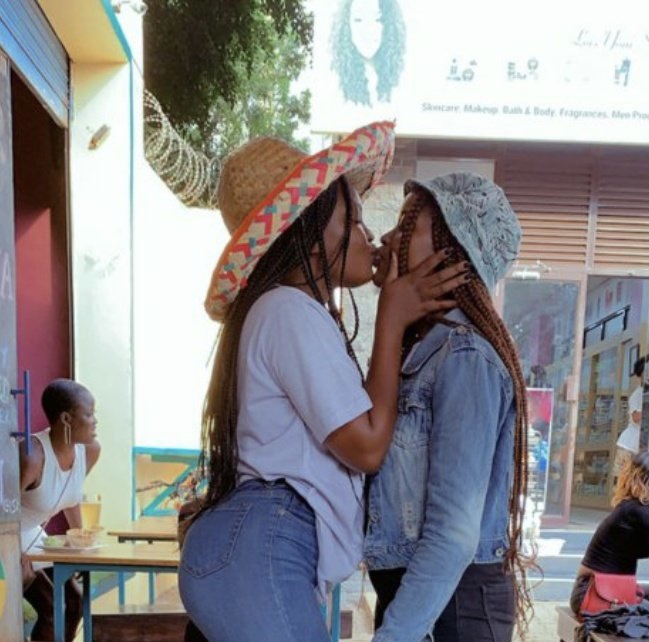 Twitter is up in flames after a photo of a social media influencer emerged online kissing a fellow girl. The photo has drawn mixed reactions among Ugandans on Twitter with many saying the two are “spoilt”.

Nana Birungi, a renown social media influencer however said that it wasn’t a kiss per se but a peck.

She reacted: “No she’s a friend and that was just us posing for a pic. It isn’t the first time I’ve pecked or been pecked by a girl on the lips. Just this time, a pic was taken. I am straight…. but I could be lesbian or bisexual if I WANTED to.” However, many tweeps couldn’t relent to judge and castigate the two ladies.

@carozanjules said: “Just because you “sin” differently doesn’t give you the right to interfere with other people’s sexuality. This nonsense of society having high expectations because someone is pastor or pastor’s kid should stop. Let people kiss whoever they want. It’s consented” while @Jgamuli tweeted: “Western culture will finish your children after they end up depressed,,,,better embrace the African culture there is no harm if you teach your kid your tradition because they will grow up respecting it🙌🙌🙌🙌🙌”

“There’s nothing wrong toward them . If you happen to go on holiday to South Africa, you will notice how Women greet themselves by kissing on the mouth. It’s a sign of friendship or sisterhood.” Marion Kafuko opined.

Let us what you think; is it okay for two ladies to kiss or peck?