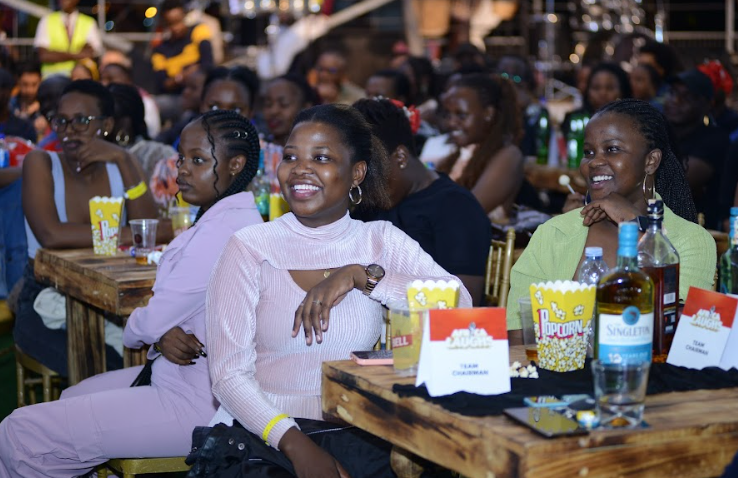 Attendees enjoy some healthy laughter during the show

The Africa Laughs comedy show made a grand return for its sixth edition, which took place on Friday 28th October at the Kololo ceremonial grounds sponsored by Uganda Waragi – a product of Uganda Breweries Limited (UBL).

The show featured performances from some of Uganda’s most talented comedians like Agnes Akite, Dr. Hillary Okello, Ronnie McVex, Ehma Napoleon, Madrat and Chiko and others.

Patrick “Salvado” Idringi – the founder of the show in Uganda – began his set by inviting Bebe Cool to join him and the two performed the classic “Fire Anthem’ by the East African Bashment Crew, and also took a moment to acknowledge and appreciate his father, who was present in the audience – for supporting his journey into comedy.

The show also featured performances from several African comedians – beginning with Q-Ndube from Zimbabwe, who sent the crowd into uncontrolled laughter with his experience of being offered a “nyanya mbizzi” rolex on the Uganda Airlines flight into the country – thinking it was a watch as opposed to a delicacy.

Kenya’s Eric Omondi, South Africa’s Celeste Ntuli and the legendary Loyiso Gola also ensured premium laughter during their sets – which had the crowd in stitches for hours.

The show was attended by the cream of Uganda’s corporate world, including Japheth Kato – Board Chair of Stanbic Bank Uganda and UBL, Jimmy Mugerwa – Dfcu Bank Board Chair and a member of the East African Breweries Ltd board of directors, Anne Juuko – CEO of Stanbic Bank Uganda, Andrew Kilonzo – UBL MD, Stephen Asiimwe – Executive Director of the Private Sector Foundation Uganda and others.

The show’s sponsors – Uganda Waragi – also delivered a supreme VIP experience, featuring a cocktail bar manned by professional mixologists and a lounge area designed in line with the brand’s coconut and pineapple flavours.

Hillary Baguma, UBL’s Brand Manager Mainstream Spirits said, “Ugandans are inherently happy people who always see the lighter side of things, and as the spirit of Uganda, Uganda Waragi was proud to be part of Africa Laughs because it was the perfect opportunity for us to further demonstrate this jovial reality through Ugandan comedy.”

The brand recently announced its sponsorship of Ugandan comedy through several comedy shows that will run across the country for the foreseeable future.

Baguma added that Uganda Waragi exists to celebrate all the things that make us proud to be Ugandan and is proud of its support towards growing and empowering comedy in Uganda.