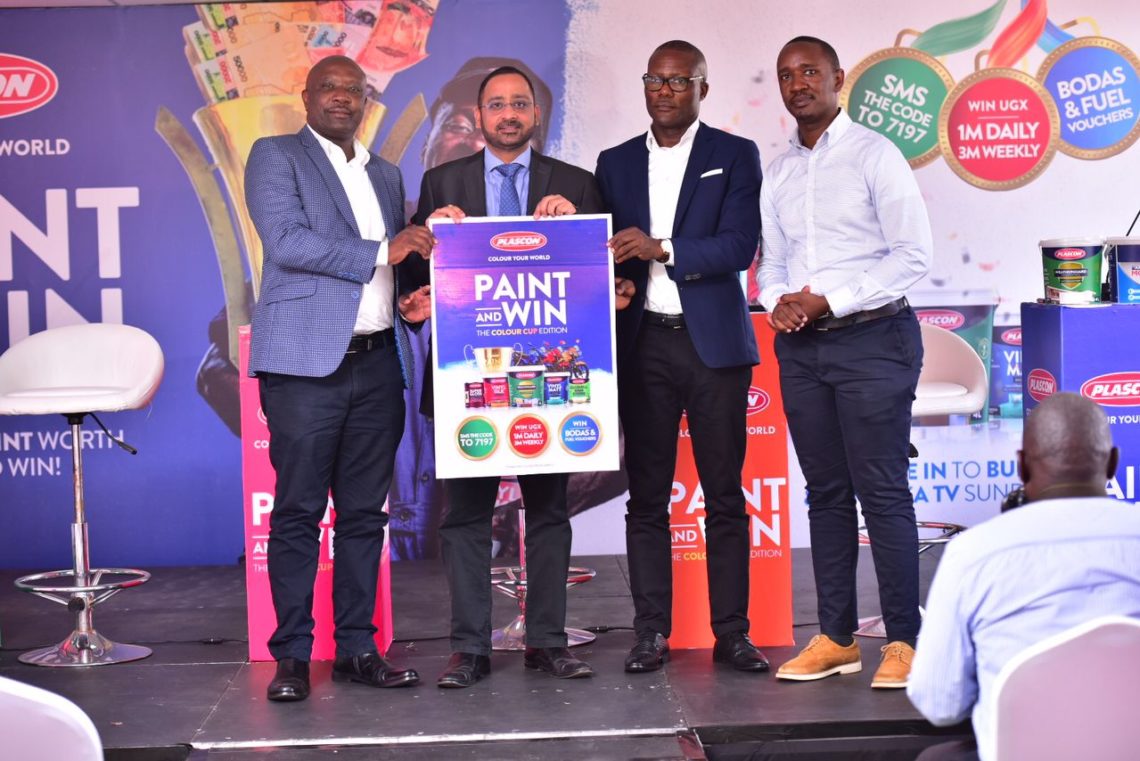 Some Shs 2Bn will be invested in this year’s Kansai Plascon ‘Colour Cup’ edition of the paint and win promo where painters and members of the public are rewarded for their loyalty and continuous use of Plascon Products.

Launched at the St. Mary’s Stadium (Home of Vipers FC) in Kitende, this year’s promotion is expected to be bigger than any others that have happened before.

Dubbed ‘The Colour Cup’ edition, the promo will run for ten (10) weeks from October 1st October until 12th December, during which the world’s greatest football tournament will be played in Qatar.

Speaking at the launch, Kansai Plascon Managing Director Santosh Gumte said Plascon will be rewarding customers with Shs 1million daily, Shs 3million weekly and other exciting rewards including boda boda’s and fuel vouchers among others. All the customers have to do is buy Plascon Paint worth Shs 100,000, get a scratch card and SMS your code to 7197 for a chance to win.

“Just like the World Cup, Paint and Win represents the biggest local event in the paint fraternity. We use the campaign to strengthen relations with our customers and our number one partners, the painters through various touch points including country-wide trade activations and online engagements. This year, we have decided to give them the ‘World Cup of Paint’,” Mr. Gumte said.

Last year, as part of the Paint and Win promotion, Plascon donated supplies worth 50 million shillings to the Entebbe Grade One Hospital, the first hospital to handle cases of Covid-19 in the country. The company donated items like mattresses, gloves, face masks, buckets, basins, JIK, disinfectant liquid and sanitizer on top of repainting the hospital wards.

Mr. Gumte said that this year will not be different as they will take on more CSR projects on top of what they have been doing over the course of the year. Just recently, the company handed over Pece War Memorial Stadium to Gulu City officials after fully refurbishing it, donated paint to Rubaga Hospital and the Shree Hindu Sabha Temple in Jinja.

“We shall continue to reach out to different communities through our CSR efforts and now that the Paint and Win promotion is here, the efforts will even be doubled. We shall reach all regions of Uganda through activations and we’ll have more prizes to give away as we move through the country. Look out for our tracks and vans, come and learn more about the ‘Colour Cup’ edition of Paint and Win,” he said.  Winners will be announced during the weekly TV shows that will air every Sunday at 6:55PM on Bukedde TV, NBS TV and Sanyuka TV.