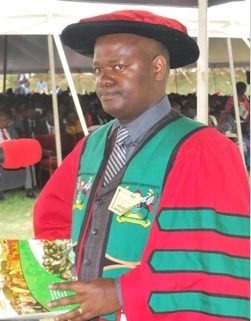 The indefinite suspension against the Makerere University Academic Staff Association( MUASA) chairman, Dr. Deus Kamunyu Muhwezi has been lifted after the two conflicting parties consented before the high court in Kampala.
As part of the consent settlement, Dr. Deus is required to submit to the internal disciplinary processes before the Appointments board.

In January, Dr. Kamunyu had sued the university in the courts of law challenging his suspension and the disciplinary processes instituted against him at the university.

It should be remembered that the suspension of Dr. Kamunyu brought the university to a standstill as most academic staff went on a sit-down strike requesting among other things the immediate reinstatement of their association chairman.

Dr. Kamunyu faulted Professor Nawangwe of high handedness in suspending him. In the suspension letter, Professor Nawangwe said the acts of Dr. Kamunyu were bringing the university and it’s officials into disrepute, intimidation by using abusive and/or insulting language, insubordination and making false statements despite several warnings and engagements with him