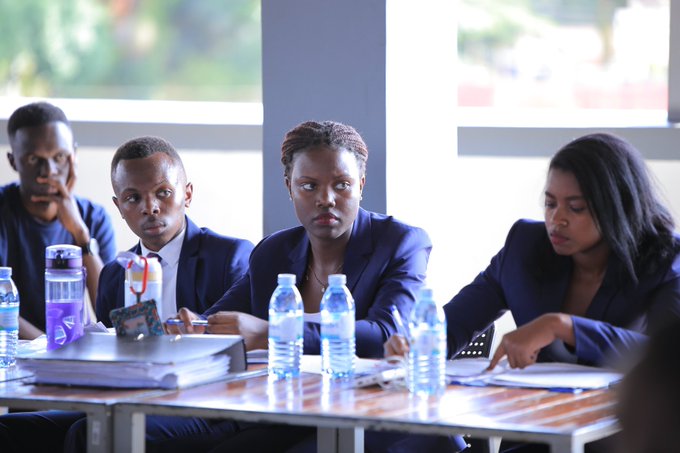 Law schools, faculties and departments all over the globe take part in their national rounds of the moot to be able to identify the winner that will represent the states at the international rounds.

The competition in Uganda took place last weekend, the 29th February 2020 at Cavendish University (CU) where the finals were between Makerere Law School (Mak) and UCU Law. A total of 4 universities were represented at the national rounds. The other teams were from Cavendish University, the host and Islamic University In Uganda (IUIU).

UCU Law was represented by Daniela Khanani, Nanfuka Brenda, Ndyamuhaki Joel and Nahwera Lynette. UCU Law will be representing Uganda for the 9th time at the international rounds of the prestigious moots that are usually held in April pooling over 300 universities in the world. This year, they will be held from Sunday 12th to Saturday 18th April 2020.

The best oralist went to Ruth Muhawe from Makerere, which university represented Uganda last year. The moot court competition was the final activity for the two day event that started on Friday with an International Law Conference hosted at the same venue.

Perhaps the most important aspect of the arrangement, the conference attracted players in international law that engaged students in discussions on rights and programs they’re advocating for to invoke their interests and career plans. Prominent among them were Ms Winfred Ngabirwe the Executive Director of Global Rights Alert, a non-governmental organisation promoting the enjoyment of human rights in Uganda. According to their website, their mission is to make natural resources benefit the people.

She stressed the need to have citizens involved in decisions governing the natural resources of the country as a way of improving inclusiveness in their management and holding their leaders accountable.

“Some of the players engaged in exploitation of natural resources are bigger than governments. Overtime, they have agreed to demands from advocacy like contract exposure, for instance Total. It is a good precedent for inclusiveness and we upload them.” Ms Ngabirwe said at the event.

The afternoon session had focused group discussions and the first one was on ‘Art and Culture as a means of influencing issues shaping society and public life’. The discussion was led by Ms Elizabeth Mbabazi, the Program Officer of the Kuonyesha Art Fund at CivSource Africa, a civic organisation.

“Kuonyesha is a Swahili word meaning ‘to show.’ Kuonyesha Art Fund supports all individual artists and collaboratives, collectives of artists. We believe in consciously uplifting women and differently-abled artists.” Ms Mbabazi said during the discussion.

The two day event was organised by Raymond Muhekyi and Bennet Alinda who are the Uganda National Administrator
and Uganda National Coordinator of the International Law Students Association (ILSA) Jessup accordingly. They applauded the participating universities for the moot and awarded certificates to all participants.

“Don’t let the conversation on International Law stop here. When you go back to Campus, continue the discussion. The components of International Law affect us all in our day to day activities and as young lawyers, you need to be as conversant with all aspects of the law as much as possible.” Muhekyi told participants.