UCU Librarian Who has Served for 33 Years Retires 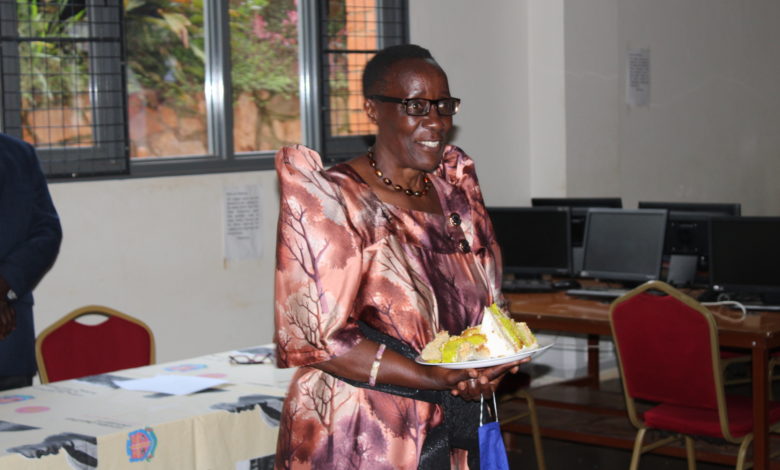 Uganda Christian University (UCU) librarian Monica Ntege this week retired from the University after 33 years of dedicated service. The University organized for her a farewell party as she exited.

David Bukenya who has been deputizing retired University Librarian Monica Ntege will now act in her former capacity. This was revealed by the Deputy Vice-Chancellor for Academic Affairs, Rev. Dr. John Kitayimbwa, during a speech he gave at a farewell party for the retiree, held April 26.

“One of the great things Monica has done is to train people. She has groomed an able person. Mr. David Bukenya is going to serve as the acting University Librarian,” said Kitayimbwa, during the party held at Learning Commons inside the Hamu Mukasa building.

Bukenya has been deputizing Ntege who had served for 33 years at the Library.

Ntege took over the office from the Late Dr. Frederick Nathaniel Mukungu, whom she had deputized for years until 2015. At the event, Ntege expressed her gratitude to the University administration for their support toward the Library.

“Thank you so much for working with us in the library. I know we have had several challenges but we thank God that the administration, just like where I came from, has been our pillar,” she said.

Ntege, who praised the administration of former Vice-Chancellor, Rev. Can. Dr. John Senyonyi for supporting the Library hopes his legacy will continue even better during the current Vice-Chancellor, Assoc. Prof. Aaron Mushengyezi’s tenure.

“There are not so many Universities or institutions where you find the administration in agreement with the Library. But, the administration here gave us a fat budget, where we could just draw money from and do our things…,” added Ntege urging the current administration to embark on inclusive Library services, which would better service provision for Persons With Disabilities and those with special needs.

She further called upon the University Vice-Chancellor to embrace the idea of establishing a University Bookshop. Ntege believes the establishment will better Library-user experience.

In response, Assoc. Prof. Mushengyezi, who was in attendance said that Ntege’s proposal will be possible especially when the University has stabilized from the economic impact of Covid-19 upon the University.

“I know Covid-19 has swept away most of our finances but we should continue to do all we can because the Library is at the heart of the Campus,” he said.

He stressed the need to scale up the Library’s Information Communication Technology (ICT) resources, saying this would quicken the administration’s vision to offer world-class Electronic Library services to users all around the world.

UCU’s Communication and Marketing Manager Frank Obonyo caught up with Monica Ntege for a one-on-one:

Who is Monica Ntege?

I was born in a family of 14 and I am the eighth child. My parents, Mr and Mrs. I saac and Ekiria Ntege were primary school teachers. They moved from Mpererwe in Kampala to Buwatte in Mubende District, where my father was a headmaster until his death in 1969. I went to Nabisunsa Girls School at age 11, proceeded to Trinity College Nabingo for A levels, where I gave my life to Jesus Christ at age 17. I then joined Makerere University for a Diploma in Library studies. At that time, the East Africa School of Librarianship had no degree program. All East Africans used to go to Makerere’s School of Library and Information Science. I then got a job with the Ministry of Education before my school results were released officially because I knew the Permanent Secretary. He was my teacher at Nabisunsa. He later posted me to Kibuli Secondary School, which was Muslim founded. I had my formation as a librarian at Kibuli.

Why are you too principled with the English language?

My parents were readers. My mother was one of those earlier teachers who stopped in Primary Four but this was a very high class in 1942. My father, who met her when she was a teacher, studied up to Primary Six and joined Namutamba Teacher’s college in Mubende District. This was a vernacular college, which started at Bishop Tucker Theological College (BTTC).

At that time, BTTC trained only school teachers and church workers. I can’t remember the year but it was decided that the vernacular section should be separated from BTTC.  That’s how my father found himself in Mubende. He used to buy for us books; both in Luganda and English languages. He didn’t know much English but he exposed us to reading. The schools I attended also set up bookshelves at the corner of every classroom, so I grew up in that kind of culture. They instilled Christianity, Servanthood and giving in me. When you give, you get more satisfaction than the receiver. I think I got this attribute from my mother who was a lavish giver.

How then did you end up at Bishop Tucker Theological College?

After serving in Kibuli for 11 years, I joined Bishop Tucker Theological College (BTTC) on June 1, 1988 as an Assistant Librarian to the late Dr. Frederick Mukungu. I was just sourced by students who would come to Kibuli for internship. They said I would be a perfect fit for the College. It was a small college with very few students and staff. We nearly knew and were concerned about everybody’s life. It was positive but on a negative side, the administration knew everything about each one of us, even who walks in and out of our houses. I didn’t like that much but I had to get groomed into the culture. I didn’t have much work compared to Kibuli because these were adults who knew why they were in school.

What were the challenges of the transformation from Bishop Tucker Theological College to Uganda Christian University?

I am one of the people who were very skeptical about starting up a university. I asked myself so many questions. How could we become a university with all these tiny buildings around? Really? I couldn’t imagine it but somehow we had faith. Small but collective. I think God honoured it. We had men like Bishop Dunstan Bukenya, who was very dynamic about the success of the university. He was our first University Secretary. He said it must succeed. Bishop Eliphaz Maari, the then Principal of BTTC, bishops and above all the late Archbishop Livingstone Mpalanyi Nkoyoyo were determined to see the dream come true. I am not so sure of the meetings they held but it took a very short time for us to receive the news. From what I have read in the archives, the discussions matured in 1996. So, Bishop Maari advised me to go for further studies in England because soon we were going to become a university and I may not be able to match with its needs.

I went to England for my degree which I completed in 1996. On return, still, he said I was going to face bigger challenges; I better do my masters quickly. However, my sponsors, World Council of Churches, could not take me on from one sponsorship to another immediately. So, after working for two years, I went back to England in 1999 and did my Masters’s at Loughborough University. When I came back, I found UCU was booming and I started to work as the Deputy University Librarian. We had about 300 students and I will never stop thanking them for trusting UCU. Some of them were our staffs’ children for example; Bishop Bukenya brought his daughter Monica Nakanwagi. We carried on the family spirit and theology students adjusted very well. Male students slept at Thelma building while the ladies resided where the guild offices are currently located. I was their neighbor, so they would come to my house for fellowship; watch TV and films because I was very much into videography. I was like a mother or matron. Then, we held our first graduation in 2000. We prayed, fasted and committed ourselves to God.  It was in October, a very rainy season. We told God to hold the clouds for a week and it didn’t rain. We celebrated for a week; danced and ate muchomo (roasted beef). We had the Commissioning service at St. Phillips and Andrews Cathedral in Mukono and the following day we held the graduation ceremony from Agape Square. Hmmm!

What challenges and opportunities did the transition from the College to UCU bring?

We inherited the BTTC Library which had mostly theology books. The number of students had increased to about 500. I was in charge of the reserve section, which was the only library for all other courses minus theology. Those students suffered because they would borrow a book for only two hours and then I would get it off and give to another student (laughs). We also defaulted on copyrights because we photocopied several books. There was no other way. We had about 30,000 copies of books but now we boast of 170,000 hard copies plus online resources. The old library accommodated 120 students and I am proud to be part of the team, which mobilized for the construction of state-of-the art Hamu Mukasa Library, which has siting capacity of about 1,200 students. We sacrificed part of our salaries and thousands of people gave to build this library. However, it is unfortunate that some students do not know the treasure they have in this library. It saddens me to clear a student for graduation and they tell me that they have never borrowed a book in all the three years of their study yet we do trainings which many of them do not attend. We take the library from the building to the classroom, halls of residence, boardroom etc. We are now online!

What are you going to do in retirement?

I have heard this question many times from my friends. They ask about what I am going to do and encourage me to request for another contract. But, the University retirement age is very clear and we have to uphold it.

I will do things I haven’t been able to do when I was working, for example, National Council for Higher Education has asked me to join their library assessment team on a part-time basis. I plan to open up a bookshop, strengthen the reading culture among children especially those at St. Peter’s Church in Dandira, Mukono District. I wouldn’t mind being part of the team that will one day write about the history of Bishop Tucker Theological College and UCU. My final message is in 1 Thessalonians 4:11. Make it your ambition to live a quiet life, mind your own business, work with your hands so that you win the respect of others and lack nothing.